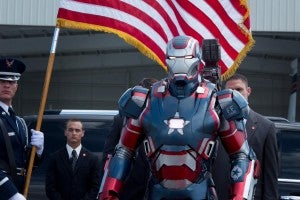 Warning: While junior novelizations are notorious for simplifying, brightening or changing story beats and endings for films, the fact that there's an official adaptation out there before the film actually hits the cinemas means that probably a good chunk of what we talk about here will be spoilers for Iron Man 3, out in theaters in about a month.Iron Man 3: The Junior Novel

, by longtime comics editor Michael Siglain, is now in stores and available for the Nook and Kindle devices, so we figured this was as good a time as any to take a look at the book, see how many of our expectations about the story of Iron Man 3 are met and how many surprises there are.

Thanks to Kevin Allen, a longtime reader and friend of the site who alerted me to the fact that the book was already widely available.

This one's the one that's most likely to have been altered to protect the sensibilities of the kids reading the book, if any, but it's certainly interesting to note that, as per the official junior novelization of the screenplay, Jon Favreau's character Happy Hogan lives to fight another day.

We'd assumed that the image at left (from the trailers), coupled with the fact that Favreau will no longer be directing Iron Man movies, meant he was ready to make like his comic book counterpart and depart the earth. Not so!

Happy is injured and taken to the hospital (I think that is where Tony is leaving when he gives his "This isn't a fight, this is good ol' fashion revenge" speech) and it is stated he will get better--in fact, it is stated after the final fight, Tony looks worse than Happy does. 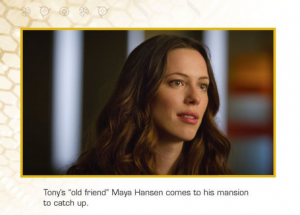 As it was in Warren Ellis's original Extremis story in the comics, Maya Hansen turns out to be a traitor to Tony, working with Aldrich Killian.

There's a slight wrinkle, in that her relationship with Killian isn't exactly cozy; he's looking to develop Extremis Tech so that he can outfit the highest bidders (including the Mandarin), while she wants it to make the world better. Really, she's just used against Tony because she doesn't think he should be the only one who has it.

Doubly funny because, although we remembered her being a traitor in the comics, we didn't consider that aspect of her character when we first saw the image at right that referred to her as "Tony's 'old friend'." It seemed so obvious, given the context of all that "love triangle/love rectangle" stuff from the producers that it was innuendo that we never even considered it as an ACTUAL giveaway of a major plot point. Remember the rumor that Eric Savin (also known to comic book fans as Coldblood) was going to be Iron Patriot?

See, Savin is one of the Extremis soldiers (his abilities allow him strength, endurance, and he can superheat his limbs to the point that he can melt Tony's armor). Savin fights Rhodey and rips him out of the Iron Patriot armor.

He then dons it and goes on Air Force One, at which point he murders the secret service and places The President of the United States in the Iron Patriot armor. The Mandarin then takes control of the armor and flies the trapped President away.

This is the Air Force One crash scene from the trailers and it happens towards the end of the movie.

Remember how Iron Man 3 is supposed to be a "Christmas' movie?"

There is a reason for that: the Mandarin decides to murder the President, in the Iron Patriot armor, on Dec 25.

His idea is that if he manages that, the date will always be a day of mourning. Also, because he is in Tony's armor, it will be seen as Stark's final failure. The execution is supposed to take place on a tanker, which is heavily guarded by Extremis soldiers.

This is why Tony calls in what he calls the "House Party," which is what we've been calling the Iron Army, to fight the soldiers.

It obviously sets up for sequels

In the end, the President is saved but Killian and the Mandarin both escape (I don't think the Mandarin even fights Tony in the book directly). The book ends with Tony deciding that the Iron Man armor wasn't a crutch, it was a cocoon and he has emerged a better man. There's a symbolic mirroring of and almost rejection of the first film's ending, as he concludes with the line, "I am Tony Stark".

But remember how we've been hearing there will be two after-the-credits sequences? Well, the Junior Novel only has one--but it doesn't tease another Marvel property. Rather, Tony knows Killian and Mandarin are still out there and must be dealt with and the Mandarin swears he will never underestimate Tony again.