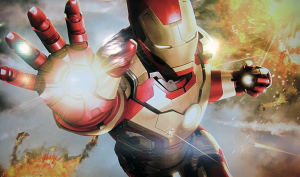 It seems to be from the same set of promotional and merchandising image as previous images fans have seen attached to iPhone covers and other such merchandise, and to the image that showed Iron Man and War Machine/Iron Patriot standing shoulder to shoulder (so to speak) in battle.

Iron Man 3 hits theaters in May 2013. The new armor depicted here has been met with mixed reactions from fans, but the storyline--a loose adaptation of the Extremis storyline from Warren Ellis's run on the Iron Man comics--is hotly anticipated and almost everyone is eager to find out what incoming director Shane Black will do with the character.