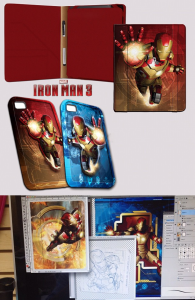 In new merchandising photos leaked to Comic Book Movie, fans can get some of th ebest shots we've yet seen of Iron Man's new armor in action on cell phone and iPad covers meant for release soon to promote Iron Man 3. They've also got tweets from Jason Coburn, attending the convention, who gives the fans who weren't lucky enough to see the San Diego Comic-Con International footage a sense for what to expect from the film's central villain, The Mandarin.

Fans who look closely may notice that the armor depicted doesn't seem to have the round lights around Iron Man's neck, which mirror those currently being used for his revamped look in the Marvel NOW! relaunch. Whether those will even make it into the film at this stage (we saw it in a very early piece of teaser art from a foreign market) remains unclear; perhaps it was never really going to be there.

Their report suggests that "wider promotional efforts" will kick off for the film sometime next month, hinting at the possibility of a formal trailer for Iron Man 3 by the end of 2012.

The film, which stars Robert Downey, Jr. alongside Gwyneth Paltrow, Don Cheadle, Ben Kingsley and about three dozen other villains, is the first of Marvel Studios' much-anticipated "Phase Two" films, also set to include movies like Guardians of the Galaxy, Ant-Man and sequels to Captain America: The First Avenger, Thor and Marvel's The Avengers, all of which are currently in various stages of development. The movie will hit U.S. theaters on May 1, 2013.