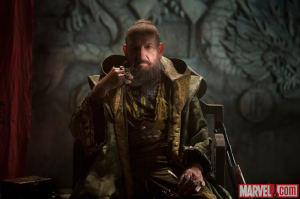 Last week, this photo ran in either Entertainment Weekly or Empire--but not in the online edition, and no good scans of the image made their way online, which kind of defeated the purpose of getting "a better look" at a character who had already been revealed.

Today, though, Marvel put the image from Iron Man 3--the closest and clearest-yet look at The Mandarin in full costume and wearing his rings--on their website.

Certainly the claim that Marvel is keeping the character "racially non-descript" is bolstered here; while actor Ben Kingsley retains the same basic look as his comic book counterpart, there are no obvious or overt attempts made to convince fans that he's Chinese, as has traditionally been his depiction in the source material.

Since a state-owned Chinese film studio is co-producing the film with Marvel, it's been widely speculated that a Chinese villain would be verboten, and that The Mandarin's multi-national terrorist organization would remain "multi-national" and not an extension of Chinese overlords.

Iron Man 3 is due in theaters in May.