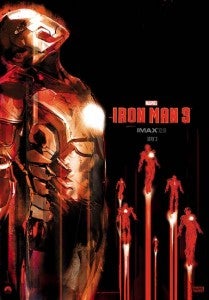 Warning: Spoilers ahead for Marvel's Iron Man 3, in theaters this week. We won't be spoiling the film just for spoilers' sake, but this is an analysis that requires us to have all the facts on the table. If you want a non-spoiler review, click over here.You've been warned.Iron Man 3Directed by Shane BlackStarring Robert Downey, Jr., Gwyneth Paltrow, Guy Pearce, Don Cheadle, Ben KingsleyRated PG-13Grade: B+In a nutshell:

Shane Black crafts a terrific, stand-alone movie that manages to combine all the best elements of the Iron Man franchise in a satisfying package. The performances are uneven and the humor often falls flat, but the script is excellent and Tony's character ends in the perfect place, whether Robert Downey, Jr. comes back or not.

Iron Man 3 is a story about promises unfulfilled, and about illusion and perception. That's a pervasive theme that's incredibly effective in part because director Shane Black and his co-writer Drew Pearce managed to let it leak out of the film and become part of the film's meta-narrative.

Within the story of the film, there are certain expectations built up that the movie sets out to dash. There are illusions that exist for the characters, for the plot and for the Marvel Universe.

Some of them, the characters are aware of and the viewer is made of almost immediately--War Machine wasn't a sustainable name for an operative who would be so close to the President, Rhodey tells Tony in the first fifteen or so minutes of the film. It's too aggressive. Iron Patriot is a rebranding--an attempt to shape the public perception of the role he plays via semiotics and the iconography of the flag, rather than substantive change. Aldrich Killian puts on a spectacular light show in the hopes of impressing Pepper, seducing her intellectually more than romantically. 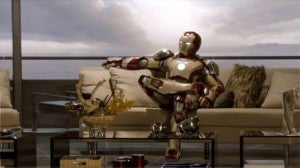 Other illusions run deeper, are more profound and take longer to reveal. We'll get to those.

This film peeks back at Tony's earliest days, his pre-Iron Man days, but that's not really where his flaws and faults come from. Here, they come from a version of himself that wants to just insulate himself from another experience like he had in The Avengers. His self-centeredness manifests differently in Iron Man 3 than it has in the past, in that in the early going it's more about self-preservation than self-aggrandizement. It makes him immediately more vulnerable, more sympathetic--which is good because frankly the film doesn't take long before its complex plot and fistfuls of characters start to move forward, providing less time for characterization as it builds to a totally different kind of spectacle--one that's necessary, that's substance over flash, even though there is, admittedly, quite a lot of flash.

Similarly, his egomania isn't as tied up in his wealth, his sex appeal, his accomplishments. It's all about how he (as Iron Man) was the only one able to really put the Chitauri threat to bed in The Avengers. He sees that the world is in danger, and he perceives himself as the only one who can save it. Forget the Hulks and thunder gods; it's all about him. That's a mindset that's actually justified in-film because, for the first time since the first Iron Man, Tony is alone here, without other Avengers to assist him or keep him company. But that it's a bit more of a noble motivation doesn't make him any more stable, or easy to deal with, than when he's the Tony who takes risks or the Tony who drinks too much.

It also gives the scene (seen over and over again in trailers) where his house and armors are destroyed, effectively leaving him with no means of defense, real sting. After all, he's narrowed the parameters of his life and interests to the point where that's really all he had. Seeing it taken away is very similar to watching Wayne Manor burn down in Batman Begins, realizing that the collapse will take out the cave and wipe out both of the hero's "lives" at once.

Honestly, the tortured, scared Tony Stark isn't as well-suited to Robert Downey, Jr.'s skillset. In the moments of heightened emotion that come early on in the film, it's Paltrow who really seems at home. Her attempts to keep it together despite the edge of fear and uncertainty that creeps in around the edges when her "hero" is in pain. Downey deadpans his way through the movie, his lack of emotion failing to connect with his own explanation of what he's feeling and his performance only really coming alive when the time comes to lash out at The Mandarin, when his more typically Tony Stark persona begins to kick in.

Of course, it's then that Paltrow is a fish out of water. The two actors are never really "on" at the same time, leading to a general feeling that the pair are out of sync. That's actually kind of perfect for the film, although it seems unlikely that it was done on purpose.

The rest of the cast are exactly what they need to be--no more, no less. Sir Ben Kingsley is, of course, a terrific performer but he does nothing at all with this role that he didn't do to greater effect in War, Inc. Guy Pearce is wasted in a role that could basically just say "smarmy jerk" on every page of the script. Jon Favreau has more to do in this film than he has in the previous two installments, but the whole movie could still more or less happen without Happy, and Maya Hansen is a plot device more than she is a character, with a predictable character arc that ends predictably. Stan Lee's cameo is...well, it's Stan Lee's cameo. It's fun and all, but in this more than any other movie it feels like it doesn't really need to be there.

The "analog Iron Man" aspect of the plot is one of the more appealing parts of the film--Black returns Tony to his roots and forces him to build himself back to safety just as he did in the first film. Then, again, he's in a dungeon at the mercy of the bad guys who want him to engineer for them. It's a twist on the original that serves Black's ends well.

It also has a distinctly comic book feel to it; when Tony is stomping around, sans armor and trying to figure out a way to take down a terrorist network, it feels for all the world like a Silver Age Green Lantern story; Hal's ring is out of juice or missing, and he has to figure out a way to [insert goal here] WITHOUT BEING GREEN LANTERN! The familiarity is comfortable and the storyline itself is well-done for the most part.

Unfortunately, a big part of that story is hijacked by the kid sidekick. Ty Simpkins is fine, but he doesn't transcend the role and the chemistry between Harley and Tony is never quite right. They have the same playful, combative chemistry he has with Paltrow and Cheadle--but when you apply that to a kid, it alternately makes Tony seem mean for being rude or dismissive to a kid, or a little silly for relying so heavily on him.

There's also an odd element at play where Tony tries to counsel Harley through a problem with bullying. It implies that Tony can recognize the signs from experience but the thing that's seen on screen is the way Tony and Maya are "the cool kids" to Aldrich Killian's ambitious, eager-to-please nerd.  It draws a parallel between the kid and the villain that it's not entirely clear Black meant to have there.

The Mandarin himself has been built up quite a bit, both in the movie and out of it. He was the most anticipated villain when Yahoo! polled fans about this year's big movies, and drew rave reviews from the studio and his co-stars.

At the end of the day, the much-discussed twist leaves the character emasculated; he's an object of fun and Aldrich Killian, once billed as little more than a cameo, is the "real Mandarin," by his own admission. Kingsley's character evokes the following response, which will likely be repeated over and over again by fans unhappy with the changes to the source material.

Rhodey: "This is The Mandarin?" Tony: "I know. This is embarrassing."

The film's action set pieces are a lot of fun, but you never get a moment quite as cool, or where Tony feels like he's in quite as much actual danger, as you did in The Avengers.  The "air rescue" that we've all been taught to expect from this film feels a bit like they're just trying to one-up the "missile armor" from that film, crafting a high-tension scenario where he did something crazy that relied completely on timing.

By the time it happens onscreen, the big showdown between Iron Man's "House Party" and the Extremis soldiers is a bit of a foregone conclusion.  There's a final illusion in that battle sequence--one that's pretty predictable, even as these things go, but pays off something like half an hour's worth of waiting to see what would happen after Pepper is infected with the Extremis virus.