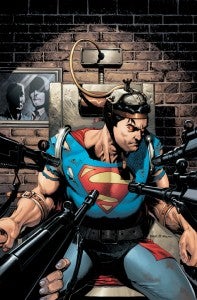 After selling out all 52 of their new superhero #1 comics in September, Bleeding Cool is reporting that DC's Action Comics #2, slated for release in the first week of October, has already been listed as "on backorder" by Diamond Comics Distributors. As the site points out, this is almost always a precursor to an issue being listed as "sold out" through the distributor, and with Action Comics #1 already having seen two sellouts and three prints, it's probably not surprising that the issue is sold out. That said, #2 drop-offs are a fact of life in the comics industry and there was an enormous look-in audience for the first issues of DC's New 52. Fans, critics, journalists and industry pros have been wondering for a while now whether any of this success would carry over beyond September, and selling out almost a week before it hits the stands certainly indicates that, at least for some of the more popular titles, it will. The last time this happened, Action Comics was followed pretty quickly by Batgirl and Justice League International, so don't be surprised to hear announcements surrounding those titles sooner than later. Action Comics follows the earliest adventures of Superman in the new DC Universe, as told by writer Grant Morrison and artist Rags Morales. the second issue will feature fill-in pages by Brent Anderson of Astro City fame (a book recently announced to be coming back as an ongoing monthly, also published by DC). The previous volume of Action Comics featured Superman's first published appearance in its first issue in 1938 and ran for more than 900 consecutive issues before being canceled and relaunched with the rest of the DC Universe as part of the New 52 initiative.

Is Action Comics #2 Already Sold Out At Diamond?