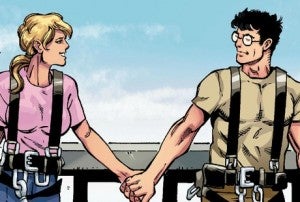 You know what's lots of fun? Trying to figure out a timeline for the comics published by one of these shared-universe publishers.

With Justice League #12 on the stands in a week and DC Entertainment announcing to the world yesterday that it features a status quo-altering relationship blooming between Superman and Wonder Woman, casual readers may have been a bit surprised to pick up yesterday's Superman #12 (by Dan Jurgens and his soon-to-be Firestorm inker Ray McCarthy) and see Clark on a date with Lucy Lane.

The Justice League story, of course, hasn't yet come out and since Justice League is no longer set in the past, we have no real reason to believe that it occurs before Superman, meaning Clark can keep his "boy scout" credentials.

In last month's Superman #11, Lois did her best to hook Clark up with Lucy, possibly to take some of the sting out of her having a relationship when it's been pretty clearly implied that she and Clark have a past. The relationship hasn't really been depicted as important to her character, per se, but writer/artist Dan Jurgens did tell us that it was something DC was invested in keeping alive.

Of course, there'll be inevitable speculation that both the retconning of the Lois/Clark marriage and the creation of Jonathan Carroll were probably put in place to allow DC Chief Creative Officer Geoff Johns to explore the Superman/Wonder Woman relationship in the Justice League book he's writing. That may or may not be (but almost certainly is) the case, but it seems someone in the Superman office determined it was important to point Clark in the direction of being able to move on.