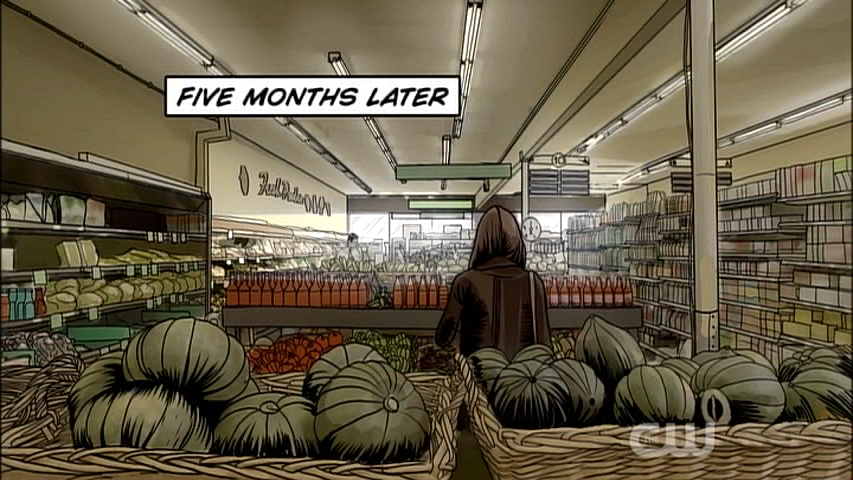 The series opens in a hospital, where the over-achieving Liv saves a man's life and then turns down a party invitation to hang out with her boyfriend.

When they get together, though, he tells her to go to the party. She does -- and the boat it's on is attacked by zombies. Liv fails to escape, but wakes up on the beach, sitting up in her bodybag and covered in scratches from the zombies.

Cut to five months later, when a noticeably paler Liv is at the grocery store buying a lot of hot sauce and a copy of Night of the Living Dead. Back home afterwards, her roommate tells her that they're reinstating potluck Tuesdays; she walks Liv into the kitchen, where her boyfriend (Major), brother and mother are.

She's broken off the engagement and taken a job at the morgue; her roommate thinks she has PTSD and "pot luck Tuesday" is an intervention. Liv tells her mother that she has to get to work but will try to be more social, including a visit to her mom's haunted house.

At work, Liv comes in and her co-worker is talking a blue streak; Liv is less talkative, but is interested in the Jane Doe corpse that's been brought in, apparently having committed suicide in the back of a garbage truck.

After her coworker (Ravi) leaves, she removes the corpse's brain and puts it in a cup of microwave noodles, which she eats. He walks in and catches her, having already figured out her secret.

He had suspected her nearly since he started; now that he's confirmed she's a zombie, he has a million questions and is checking her vitals and the like while they talk. He had worked for the CDC but got fired when they were tired of listening to him be hysterical about man-made plague and biological warfare. She explains that she eats to keep from being feral.

She flashes back briefly to the night of the party, when a drug dealer with a designer drug was the one who slashed her.

A cop comes in to ask whether they hvae identified the Jane Doe. The answer is no -- until Liv gets a flash of the woman's memories and tells the police officer how to identify her. When the cop wants to know what's going on, Ravi says she's psychic.

Liv heads to the haunted house, and while people are fooling around, she hears a scream and gets a flashback to the Jane Doe being attacked by a man she later identifies as a local weatherman.

She heads to the police station and meets up with Detective Babineaux, who recruits her to come talk to the weatherman with him. When they arrive, they show the photo to the weatherman, who reacts in such a way that Babineaux is confident he's the guy. The weatherman -- Johnny Frost -- wants them to make it go away, but then when they tell him they think he's a murderer, he shows them a website; the murder victim, Tatiana, was an escort.

Back at the morgue, she's talking with Ravi about how she doesn't believe there are any other zombies out there, when Babineaux comes to get her and bring her with him to talk with Tatiana's friends.

When the girl starts talking Romanian (she tells Clive she can't speak English), Liv starts talking the same language, to her own surprise. When they ask about Tatiana, the friend firsts asks what she's done this time, and then closes the door. They do get Tatiana's full name before they leave.

Tatiana's apartment has been ransacked, but her valuables were left behind. They find Tatiana's phone, and the voicemail from the day of her death indicates that she stole something. Liv realizes that she got toe Romanian and the kleptomania from the brain. She sees a vision of Tatiana's death, at the hands of a man whose ring she stole.

The friend is missing, but her neighbor gives them a lead on another girl.

At the morgue, Ravi is looking at her blood under a microscope, trying to cure zombie.

Outside, Liv tells Babineaux that she can't join him on his trip to talk to the next girl. Instead, she goes to see Major, hoping to rekindle their romance now that she considers the possibility of a cure. Instead, she finds him there with another girl (playing a zombie-killing video game) and runs off.

The next day, Babineaux's boss hands the case off to another cop. Babineaux objects, saying he has leads on the other girls, but the boss doesn't care since Babineaux hasn't been able to get an arrest in yet.

Back at home, Liv is waching TV when he roommate comes in and asks if she's seen her pens. Liv has them all in a little pile in a drawer.  Her friend tells her that she needs her to step up and get over whatever's going on. Liv decides to return all her stolen things and focus on finding justice for Tatiana. She goes to the police department and is there when the other detective gets the address; then she returns to the morgue and meets Babineaux, who gives Liv a Romanian phrase to translate. She says it means "bearded pig" and Babineaux realizes that the other cop, named Pratt, had arranged to replace him on the case because eh was getting close.

By the time Babineaux and Liv get the address to find the girls, Pratt is already there and has them tied up, Babineaux chases Pratt, who eventually gets away and outside. Liv chases him down with the car, cutting off his escape. He gets out and shoots her, dragging her out of the car and driving away. Babineaux sees this, but she's missing when he gets outside; in fact, she's riding on top of the car, punching through the windshield and causing Pratt to crash. She's thrown from the roof and while he's unconscious, she just wakes up a little more feral and zombified. Babineaux stops her before she eats his brain.

She explains that Pratt missed her and then she chased him down with an adrenaline boost. After stopping to get stitched up by Ravi, she heads out to the haunted house to dress up as a zombie and play with kids.

That night, she finally manages to sleep. The next morning, she wakes up to the sound of sirens, and sees a vision of the drug dealer -- now fully a zombie -- attacking someone.