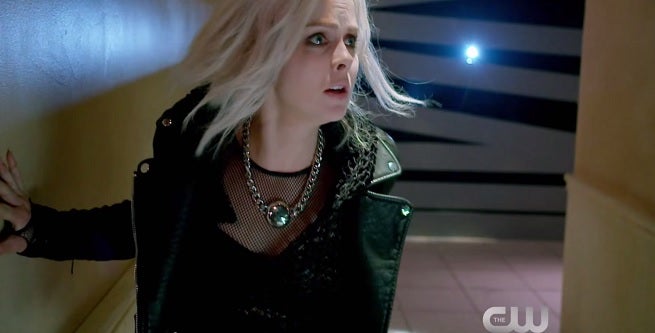 In today's installment of DC All Access, DC Entertainment's Tiffany Smith sits down with The CW's Rob Thomas, creator of Veronica Mars and the man who developed iZombie for television with his longtime producing partner Diane Ruggiero-Wright.

"In the comic book, there are all sorts of monsters, but that HBO show True Blood was already doing the all the monsters," said Thomas of the decision to change so much from the comics. "And there's also like a vampire/werewolf/ghost show. So I wanted to stay out of that territory."

That said, he discusses in the video what he'd already said previously: that they try to carry the high concept and the tone over from the comics by Chris Roberson and Mike Allred.

"I think what we carried over was the big idea of the comic book which is this woman in her mid-20s becomes a functioning zombie and when she eats brains she inherits the memories," Thomas told me at Comic Con this summer. "Even in the comic book she tries to solve these outstanding issues of the dead and we play that in the TV series as well. What I needed was a story mechanism that allowed her to do it every week. I wanted very closed cases and working in the police morgue gave me a dead, murdered body each week which made it easier to adapt as a TV show."

In the video, Thomas elaborated, "I'll be honest, and this makes no sense: I like virus-caused zombies as opposed to supernatural, curse of the pharaoh-type zombies. It's weird that I have to believe in fake science rather than fake supernatural stuff when I write, but that's just kind of a personal taste thing."

He also discussed casting Rose McIver as Liv. You can check the video out below.

Who's ready for some all-new #DCTV?! iZombie, the upcoming series based on the best-selling Vertigo comic, debuts March 17th on The CW. Curious what to expect? Then be sure to watch this exclusive DC All Access interview with iZombie co-creator Rob Thomas (Veronica Mars), who discusses the differences between this show's zombies and others you may have seen, how they found the perfect zombie lead, and why they chose to stray from the comic book storyline.

iZombie Showrunner Rob Thomas on Why He Made Changes to the Comic (Hint: True Blood is Involved)