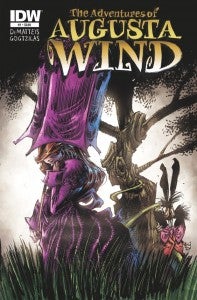 Earlier today, ComicBook.com brought you an interview with veteran comics scribe J.M. DeMatteis, who wrote a backup feature for last week's status quo-shattering Amazing Spider-Man #700 and who, the week or so before that, was revealed to be DC Comics Co-Publisher Dan DiDio's co-writer on upcoming issues of Phantom Stranger.

In that earlier conversation, DeMatteis explained, "In many of my stories, most notably Moonshadow and Brooklyn Dreams (the title of the Spidey story, “Spider-Dreams,” was a nod to BD), I’ve played with time and memory, the way we think our lives have been versus the way they actually were; the way we choose to remember events, even if we know they might have been very different.  That’s one of the things I wanted to explore in this story.

Certainly that's a theme that's very fertile ground to be carried through not only to Phantom Stranger--where the central character was revealed essentially to be Judas Iscariot in the DC Universe, even if nobody's actually said those words in that order on the page yet--but his creator-owned title, The Adventures of Augusta Wind, currently coming out from IDW Publishing and featuring art by co-creator Vassilis Gogtzilas.

In our review of the first issue, ComicBook.com said that "The Adventures of Augusta Wind breaks a lot of the rules of today’s all-ages comics market, and comes out the other side better for it." It's a great title, which you can check out on ComiXology by clicking here.

In that story, the main character first appears as a teenage girl, telling a fairy tale to her siblings about how, before she ever met them, she was a mythical being who saw their family on a trip to earth and decided to join them and be a part of their happy, little life. Unsure of exactly how she came up with this fanciful tale, it's as surprising to Augusta as it is to the readers to discover it's actually a true story. DeMatteis joined us to talk about both projects. 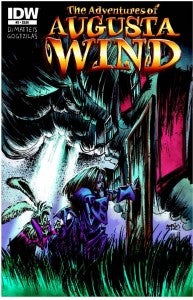 ComicBook.com: Where'd the concept of The Adventures of Augusta Wind come from?

J.M. DeMatteis: It started with the name—Augusta Wind—which came to me one morning while I was sitting on my back porch listening to the wind rattle through the trees and against the house. I had no idea who Augusta was or what her story would be, so I filed the name away in the back of my head, knowing that, in her own time, Augusta would let me know.

Images and ideas eventually started forming around the name and soon the basics of the story—the themes, the journey— appeared.

ComicBook.com: Given the fact that similar conceptual territory has been trod by books like Fables and Sandman, what made you think all-ages was the way to go with Augusta?

JMD: Don’t be so sure that similar territory has been trod until you’ve read the whole series—and keep in mind that the mini is just part one of a much larger tale. As for the all-ages approach: As Abadazad and Stardust Kid attest, I love children’s literature and kid-friendly comics...at their best, children’s books appeal equally to young and old and grapple with Big Themes and Big Ideas in a way so-called adult literature often can’t. It’s just a natural fit for me—and I knew, from the first whisper, that The Adventures of Augusta Wind was a going to be a kid-friendly series.

ComicBook.com: Are there any of these names for the characters--these literary references and puns and the like--that you're particularly proud of? 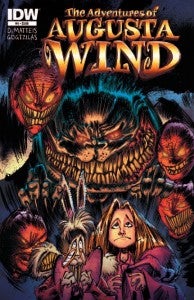 JMD: I’ve had fun with all the names: Augusta Wind, Castle Zero, Nowhere Island, Miss Information, on and on. And of course the names are just one aspect of the fantasy world-building going on here. One of the things I love about stories like Augusta or Moonshadow or Abadazad is that I get to create an entire universe from the ground up. It’s like giving the world inside my own head shape and form. Pure creativity...and incredibly liberating.

ComicBook.com: How'd you hook up with [series artist] Vassilis Gogtzilas?

JMD: I met Vassilis—via email—through my son, Cody, back when Cody was an editor at Devil’s Due. Vassilis and I have kept in touch over the years and I’ve become a big fan of his work.

As the Augusta idea was developing, I kept returning to an image of my lead character—seeing a girl in a Victorian dress, holding an umbrella (I knew she could fly on the wind currents), living in a ruined old castle. One day I opened the mailbox and discovered a limited-edition sketchbook that Vassilis had done, which he very kindly sent my way. Flipping through it I came across the image of a girl in a Victorian dress, holding an umbrella, sitting in front of a ruined old castle. Without knowing anything about my story, Vassilis had drawn my main character! I knew then that he was meant to illustrate the series. I immediately raced up to my office, emailed Vassilis, told him what had happened and asked him if he would like to collaborate with me. A few minutes later a resounding “Yes!” arrived from Greece and we were off. 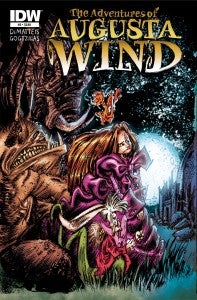 ComicBook.com: Was that relationship one of those things where you already had a look in mind and you went for an artist who accommodated it, or where you co-created the property with the artist and the look followed?

JMD: Once Vassilis signed on he became a very active co-creator. His style became the style of the book. Vassilis is always designing new characters, sending me sketch after sketch after sketch. Sometimes I’ll look at the drawing and realize it fits one of my already-existing characters...and other times I’ll love the sketch so much that I’ll have to create a character, and plot development, to go with it. It’s been a truly delightful collaboration.

ComicBook.com: What brought you to IDW for this particular series?

I’ve had good experiences working with IDW on both The Life and Times of Savior 28 and the hardcover reprint of Brooklyn Dreams. They were the first company I went to and they said yes very quickly.

ComicBook.com: When do you take over co-writing duties on Phantom Stranger?

JMD: My first issue is Phantom Stranger #4—which is out any day now, I think. 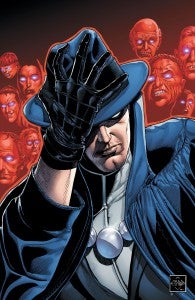 ComicBook.com: What do you see as the central thrust of this book, and what is it that you bring to it that Dan couldn't do alone?

JMD: I see Phantom Stranger as a redemption tale and, if you’ve followed my work at all, you know I love redemption stories. As for what I can bring that Dan can’t... I think the issue is more that Dan is very busy with his other duties and needed someone to step in and collaborate so that the book can stay on schedule.

In the end, what I bring to the table is my own perspective on the character and his world. Dan’s set up a wonderful mythology and, as the guy putting the words on the page, I have a chance to deepen the characters, explore the mythos, poke around and find new elements hiding in the shadows. As I've seen working with Keith Giffen, when you’re the “script guy,” you don’t have to worry about the heavy lifting—creating the basic plot structure—and you’re free to really explore the story and characters from new, and often surprising, vantage points.

I love the supernatural corners of the DC Universe and I have a special fondness for the Phantom Stranger, so I’m delighted to have this gig. Also very delighted to be working with Brent Anderson, who’s doing such terrific work on the book.

ComicBook.com: I feel like whenever something leaks via Dan DiDio's Facebook page, it's not getting the same kind of "presentation" you expect of an announcement that comes in the DC blog or even the solicitations. Did you know, prior to getting a bunch of congratulations notes that morning, that you were going to be announced on Phantom Stranger that day?

JMD: No. In fact I’d done an interview with Newsarama that I thought was going to be the Big Announcement. That said, having the news leaked by Dan is nothing to complain about. Given his position in the company, people pay attention when he speaks. 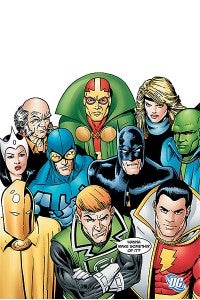 ComicBook.com: There is, of course, a sense out there among some fans that the Justice League International characters you and Keith wrote together in the '80s and '90s have been somewhat...abused...in recent years. A lot of fans hurl that blame at the feet of Dan DiDio. What are your thoughts on that as someone who's worked both under him and now with him?

JMD: It’s in the nature of mainstream comics that characters change...and then, over time, change back again. Just look at the way Marvel deleted the Clone Saga and then, in recent years, reintroduced characters and plot-lines to the Spider books. What goes around comes around. (Just ask Bucky!)

Our JLI characters have gone through their convolutions over the years, but Justice League International is an important part of the DCU again. I just read that Vibe—a character I killed off back in the 80’s, just before my JLI run—is coming back. Everyone comes back, eventually. I’d bet good money that, one day, Ted Kord and Booster Gold will be together again, cracking wise and getting into trouble. This isn’t some news scoop—I have no information to support that. It’s just the fact that, as I said before, what goes around comes around.

ComicBook.com: Is it a little weird that you haven't worked with Keith since the launch of the New 52, but now both of you have co-written with Dan DiDio?

JMD: I hadn’t thought of that. Weird? No. Interesting, though. Fact is, when the opportunity arises to work with Keith again, I’ll jump at the chance. And I hope the chance comes sooner than later: I love working with Giffen. He’s a brilliant collaborator and a wonderful guy.