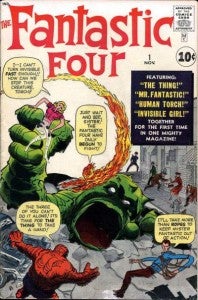 Acclaimed comic book artist Jack Kirby was responsible for co-creating some of the most memorable characters in comic book history, as well as illustrating some of its iconic and classic battles. Now, Kirby's children are possibly creating an epic battle of their own. According to the L.A. Times, the late Kirby's four children have filed what has been referred to as "notice of copyright termination" for 45 characters to companies such as Marvel Entertainment, Disney, Universal Pictures, the owners of Hulk distribution rights, and 20th Century Fox, owners of the movie rights to distribute X-Men and Fantastic Four films. According to current copyright law, creators and co-creators have the right to attempt to regain copyrights to work they assigned to a company 56 years after first publication, but they can also attempt to regain their rights by giving notice of their intention up to ten years prior. A representative for Disney did not seem too surprised by the notices, saying, "The notices involved are an attempt to terminate rights seven to 10 years from now and involve claims that were fully considered in the acquisition [Disney's acquisition of Marvel]." The Kirby family would be eligible for rights to the intellectual property in stages, with the Fantastic Four becoming available in 2017, then the Hulk in 2018 and the X-Men in 2019. Not to put the cart before the horse, the legal process involved here could be messy, as Kirby and Stan Lee, his frequent collaborator, were working in an environment at Marvel where who created what portion of which character and when could be tricky to decipher for a legal team. In an interesting note, the Kirbys are being represented by the same law firm that handled the dispute over the rights to Superman for Jerry Siegel, co-creator of that character. What happens if the Kirbys do in fact win? Will they sell all the rights to film franchises such as Spider-Man (currently held by Sony Pictures) to Disney? Will they try to create and license new products and derivations on current books/product/etc? Only time, and possibly a large group of attorneys, will tell the tale!