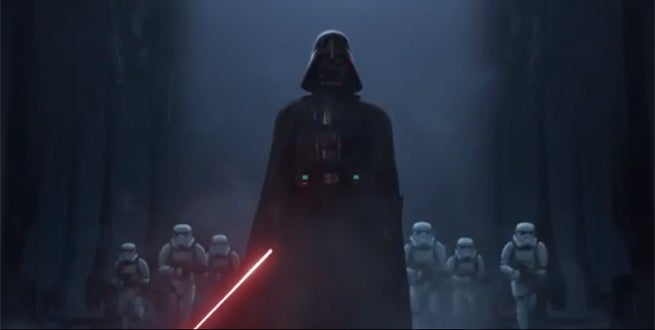 At a press conference during Star Wars Celebration Anaheim Saturday afternoon, shortly after the season two trailer was revealed, the very first questions were all about Darth Vader. The iconic character will appear throughout the season, as a primary villain, sent by the Emperor to take care of the "Rebels on Lothal."

Executive and supervising producer Dave Filoni confirmed that, as he did in the special scene in the broadcast TV premiere, classic Vader voice James Earl Jones will continue as the icon. Jones will voice the character throughout Star Wars Rebels season two, and if he continues to be a character and the show keeps going, there's every possibility he'll always be voiced by Jones.

Filoni also joked about directing him, saying it's "actually incredibly easy," because Jones embodies the character so completely with his commanding voice. "[Jones] said to me, 'David, I haven't done this in ten years, can you remind me how?' and I said, 'No, you're doing it! You're doing it right now!.'"

As for what Vader will be doing, the trailer revealed he's hunting down the Rebels crew, and comes face-to-face with Kanan and his padawan Ezra. Filoni also teased at the panel that the relationship between Ahsoka (Vader's padawan when he was Anakin Skywalker) and Darth Vader is "part of the story we have to tell."