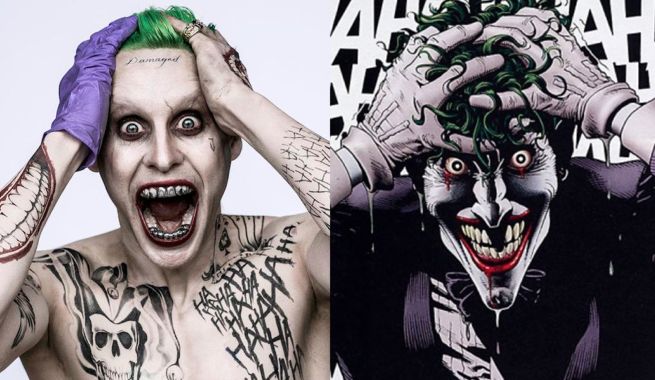 Suicide Squad director David Ayer has released the first official photo of Jared Leto as The Joker, and...well, unsurprisingly, reactions have been mixed.

There's certainly a lot going on in the photo; it almost seems like rather than taking one singular interpretation of the character and going with it (as Zack Snyder seems to have done with Frank Miller's Batman in Batman V Superman) or riffing on the classics to make something your own (as Snyder has done with Superman and Wonder Woman), Ayer has gone the route of taking numerous different interpretations of the character through the years and kind of throwing them all at the wall.

The first thing that jumps out at me, perhaps because there's only one of them, is the purple glove. In most stories prior to the mid-to-late '90s, I remember The Joker wearing his purple suit and gloves. We've strayed from that more recently, and it isn't particularly cinema-friendly (at least not in a film universe that takes itself so seriously), so the glove is likely a wink-and-a-nod to that attire, without actually depicting him in it here since the odds are good if it makes it into the films at all, it will be briefly. 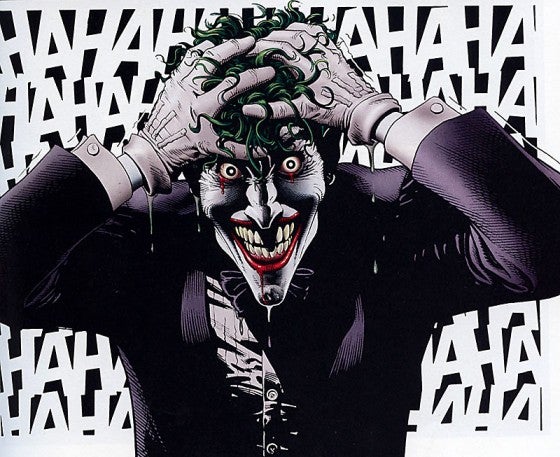 There isn't a ton to say about the hair. Certainly the fact that the hair is bright green and the skin is super-pale is to be expected. If there's anything that jumps out at me, it's that The Joker tousling his own hair like that is a nod to an iconic image from Alan Moore and Brian Bolland's The Killing Joke, with the exception that unlike Heath Ledger, Leto's version of the character makes no attempt to give the hair curl and volume. It's just straight, green hair, like what we got from Jack Nicholson. 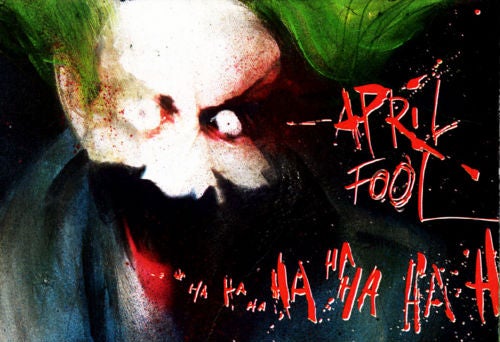 There is a lot of familiar Joker iconography in the tattoos. Let's break it down a little:

First of all, we have Joker/card-based tattoos. The four of a kind (presumably with a Joker for the fifth card) says "All in" beneath it. The skull-in-a-jester's cap is a popular image in pop culture and with tattoo artists based on a Google Image search, but I don't know of any particular story in which either played a big role for The Joker (although Batman does have that giant Joker card in his cave).

The "Damaged" forehead tattoo seems likely to be a wink and a nod to Charles Manson's face tattoos, given the "Joker's the craziest guy ever" vibe we're getting here and that's been present basically since The Dark Knight Returns popularized the idea of trying to psychoanalyze these characters. 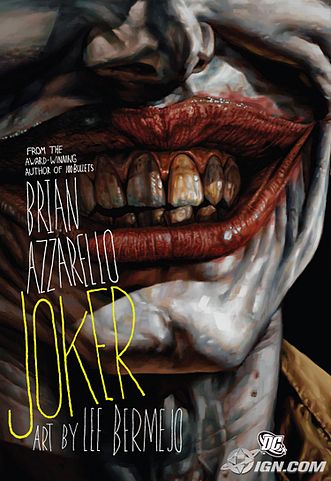 The laughter is familiar enough; again, we get a bit of a callback to that same Bolland image. Beyond that, though, we have two different kinds of laughter scrawled in different tattoos, and the font/handwriting on them don't match what we see in the Bolland image. Rather, they evoke Arkham Asylum: A Serious House on a Serious Earth and Joker, the original graphic novel from Brian Azzarello and Lee Bermejo.

We also get two different mouths -- one on one of his forearms and the other on his un-gloved hand. It looks like they're different representations of Joker smiles over the years, witht he one on his forearm resembling the smile Jock gave the character during his time drawing Batman and the one on his hand being a little more ragged -- maybe like (again) the Bermejo image at right or even Heath Ledger's The Dark Knight joker. It seems as though this Joker will acknowledge the history and the ever-changing nature of the character a bit.

He's got a trio of unidentifiable tattoos -- one on his bicep, one on his right side wrapping around to his back and one across his belly. It looks to me as though the one on his belly might actually just be a stylized font that says "Joker," but I could easily be wrong there. It's hard to tell what thing on his arm is, other than that it looks like some kind of bird. Maybe the laughing fish, though? And the one on his back looks like at least two words and that what we can see is that the first word ends in "O'S" or "OS" -- I can't tell if that's an apostrophe or just shadow -- and the second word end in "LY." It's underlined hysterically, which makes me think maybe the second word is "only."

There's also a stray "J" on his face that reminds me a bit of a teardrop tattoo and some work around his eyes that makes his face look "cracked" and also makes me wonder whether the dark areas around his eyes are actually tattoos too.

It may be reaching, but many seem to think THIS is a hint at Robin. A collapsed wing...dead bird...murder of Jason Todd? What better way to get at Bats than to tattoo his dead sidekick on your arm? 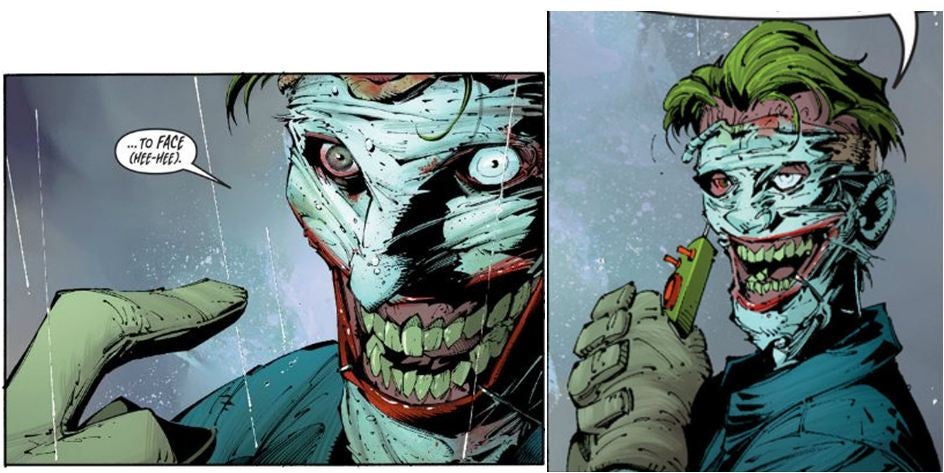 Joker's smile is less ragged and jagged than he's been in recent years, and looks more like a traditional Joker card or evently-applied lipstick now. Inside his mouth, we have teeth covered with grills...which I can't find a comic book precedent for, but it makes me wonder if, like the Bermejo image above or more recent images from Greg Capullo, this Joker might be hiding some really awful teeth under there.

Seems worth noting that the evenness of the coloring and the muted tone of it suggests that his skin is bleached here, presumably by the chemical accident, rather than painted like in The Dark Knight. 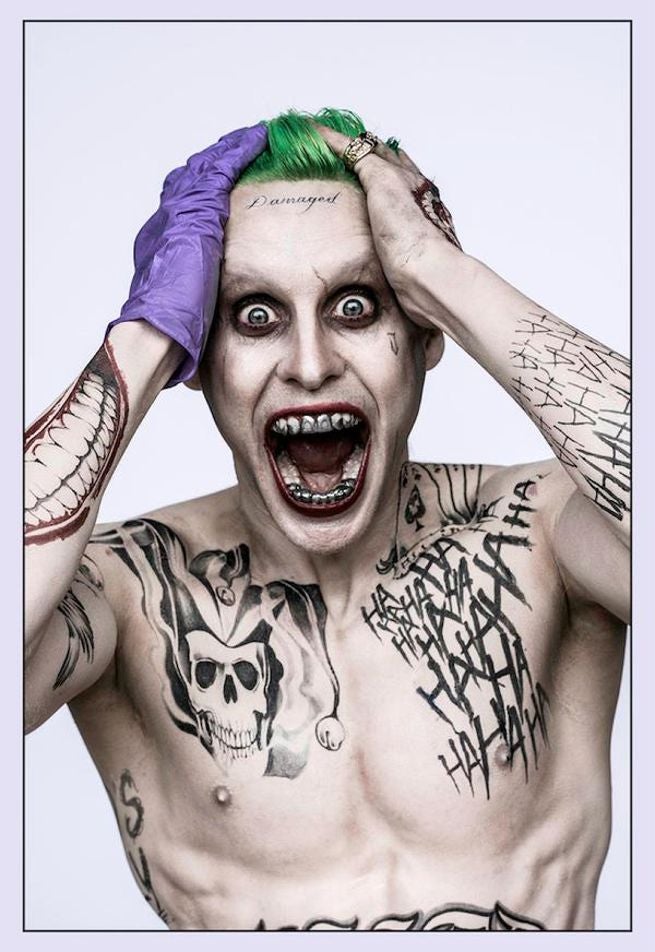 The tattoos, grill and pinky ring all kind of coalesce to give the notion of a stereotypical "gangsta." It's disconcerting on a character whose primary identifier in recent years has been the kind of insanity that would make a long-term, organized criminal career nearly impossible.

The wide, wild eyes certainly match the image from The Killing Joke but also bear some resemblance to Capullo's take on the character as well.