A Twitter account purporting to be that of comics legend Jim Steranko has been churning out some of the most entertaining and, if true, informative tweets in all of comics this week. Steranko is, himself, as much a character as many of the ones he worked on over the years. A magician and illusionist, his storied comics career was fraught with conflict, and though he revolutionized Nick Fury: Agent of S.H.I.E.L.D., he still found himself fired at one point following an epic phone argument with Stan Lee. His pre-comics life and his time as an illusionist served as inspiration for Michael Chabon's The Amazing Adventures of Kavalier and Clay. So...what stories has this Twitter account (which we believe to be him, but which is not confirmed by Twitter) brought to life recently? Lots--but here are three that are more comics-centric than the "I drew counterfeit money" variety: 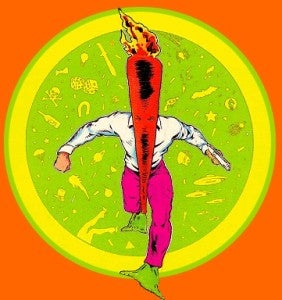 That time he vandalized Flaming Carrot and Mystery Men creator Bob Burden's car Always loved the DragonCons--and Pat Henry's the guy responsible for packin' them in. Real party people! One night, Bob Burden and I were hanging out with a couple babes and we were out on the street when when a couple fans accosted me for a drawing. It's civilian time here, but I have that effect on people. I said, "Glad to. Two conditions: I need an ice pick--and the hood of your car!" Bob steps in."Hey I'll give you the ice pick and you can use the hood of my car!" Everybody looks at me! 'm cool with that. Everybody expects an eyepatch about the size of a dime, but my creative blood is up! I asked one of the girls to be my model, sit on the roof--and to strip down to her underwear. Hell, it's 1AM and it's Atlanta and it's Saturday night at DragonCon! She does it! Then, I announce...I'm about to draw her full-figure portrait on the car's hood--IN REAL SIZE! To his credit, Bob didn't flinch a muscle as I icepicked her curves across the entire car's hood! 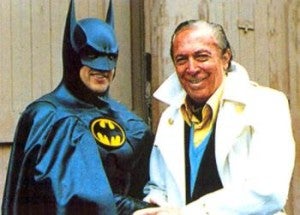 That time he b*tch-slapped Batman co-creator Bob Kane I'd hadn't encountered Kane in my travels, but at one rockin' SDCC, an associate asked me if I wanted to meet him, and walked me into a hallway. There he was, in a small group of people, wearing patent-leather shoes--and an ASCOT, like he was Vitamin f******g Flintheart in a Dick Tracy cartoon. For years, I'd heard how he'd taken credit for Bill Finger's contributions (in addition to half his pay) and other despicable tales from his associates. But nothing aces an in-person encounter. We were introduced and Kane began talking about my Batman chapter in the HISTORY OF COMICS, which treated him--and everyone else--very respectfully. He felt I credited Robinson & Finger (both of whom I knew intimately) too much. Kane (aka Kahn) was beyond pretentious, an intolerable ass as pompous as they come. I bit my tongue while he regaled us with his many achievements. The group was waiting for an elevator, which they stepped into when the door opened. Our conversation ended, but not before he said: "See you later, Jim, baby," and cuffed me across the face--like some rat-pack street gesture he'd seen in some cheap flick. The doors closed...I was stunned by the sheer audacity of a stranger--like him--to lay a hand on me, and boiling with anger. That night, I couldn't sleep and the next morning began combing the halls for his Bat Majesty. Around noon, I found him in another group, which I walked into. "Good to see you, Bob, baby!" I said, then b*tch-slapped him across the face. But this time, there was no elevator door closing between us. I stood there for about 15 seconds, waiting. He did nothing. I turned and left. But I regret it now. I regret that he didn't do anything about it, even though he was at least a head taller than me. I wouldn't have minded bleeding at all for one more opportunity to give Kane the kind of Bat Lesson that Finger, Robinson, Sprang and others only dreamed of. 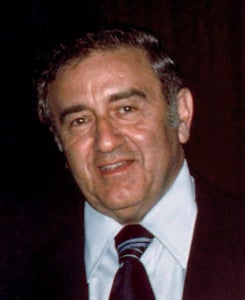 On meeting Superman co-creator Jerry Siegel taking out Marvel's trash One noontime, while the bullpen was out to lunch, I stayed in the Marvel offices to catch up on my phone calls. While I was conversing, I noticed a guy I'd never seen before, emptying ashtrays into wastebaskets. Chunky little guy shuffling from desk to desklike an ancient cleaning lady, central casting for just another face in the crowd. But, a little at a time, I began to realize I knew who he was. Then I wrapped the call, walked over and turned him around. "You're Jerry Siegel?" I'll never forget how he looked up, eyes slightly rheumy, sad, worn out. "What the hell are you doing with the ashtrays?" He said he thought he'd make himself useful while everyone was out of the office and that he'd just started working at Marvel. Ashtrays? "Jerry, you're THE MAN! You put comic book heroes on the map!! All these sons of b****es owe you their jobs, their lives!!!" I made him sit down, got him a drink of ice water. Stan had obviously hired him to shame DC for not taking care of their own. Helluva coup! I did my best to make Jerry at home--and lay off the ashtrays. We became tight friends. Often, when I was on the West Coast, I'd have dinner with the Siegels. He'd dig out evidence from the past that nuked my four-color soul, revealing behind-the-scenes tales of Superman's creation. (PLUG: And he loved how he'd been portrayed in THE HISTORY OF COMICS!) Jerry and Joanne--one of the classiest women I'd ever met (and the model for Lois Lane)--made me part of the family. After Jerry died, Joanne confessed that Jerry had told her that if she ever needed help, I'd take care of her. Very touching.