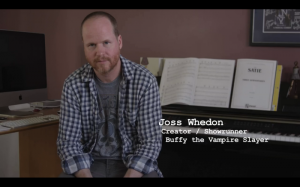 Joss Whedon joins the showrunners behind Spartacus, Battlestar Galactica, Lost and more in the new documentary Showrunners, currently being funded via Kickstarter.

The film, which examines the important but ill-defined role of a television showrunner, talked to a number of the writer-producers as well as actors, directors and other key parts of the production team about how to succeed as a showrunner and how to do well in failure.

"I think attending Comic-Con is extremely important," says Spartacus showrunner Steven S. DeKnight in the promo seen below. "Writers are out in the forefront now, just like actors and directors and you really need to not only promote your show, you need to represent your show."

"The burnout rate for showrunners is 100%," said Bill Prady, the co-creator of The Big Bang Theory, elaborating that everyone he's aware of gets out of the business by their mid-to-late fifties, whether or not they're a success.

Check out the site above or the video below for more information.

The Mitchells vs. the Machines Featurette Reveals Spider-Man: Into the Spider-Verse's Influences