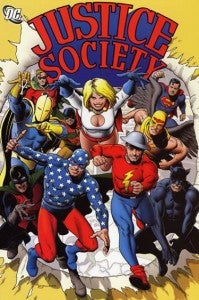 Ever since DC Comics announced The New 52, one of the biggest fan outcries has been over the absence of the Justice Society in all the new titles being launched. Over the weekend, DC Comics finally put fans' fears to rest and officially announced that the Justice Society would have a place in the new DC Universe. DC Comics made the announcement both in The New 52 panel at the Fan Expo Canada and on their blog.

At Fan Expo Canada, DC Comics announced that writer James Robinson is working on a new Justice Society comic book with artist Nicola Scott. It was also revealed that Earth 2 would be making a return, so evidently the new Justice Society adventures will take place on a parallel world in the new DC Universe.

Also, in a post on The Source, DC Comics confirmed the news, but they also added a tease. Not only will the Justice Society of America be returning, but with like we’ve come to expect with The New 52, DC Comics promises “there’s a significant twist.” A quote from DC Comic Executive Editor Eddie Berganza says, “It’s everything you want, but not what you expect.”

So what could be the big twist with the new Justice Society? With the return of Earth 2, DC Comics could really shake things up with the new Justice Society. Could Earth 2 be a world far different than our own? Maybe, the presence of superheroes has radically changed the outcome of various historical events on Earth 2. This big twist tease definitely has us wondering.

Justice Society To Return To DC Comics With A Big Twist