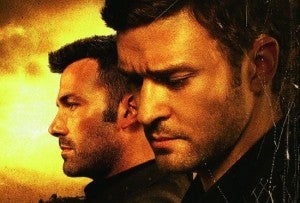 While Bryan Cranston appears to have been fan cast into the role of Lex Luthor in Batman Vs. Superman, Justin Timberlake has just thrown his name into the ring to play a Batman villain.

In an interview with Fresh 102.7, Timberlake was asked if he had any interest in playing Robin. Timberlake said, "Not a chance in hell. I ain’t playin’ Robin. I have no aspiration to ever be a superhero in a movie. I just don't"

While Robin isn't Timberlake's cup of tea, he did have an interest in another Batman related role. Timberlake said, "Now VILLAIN! I’ll tell you the villain I want to play more than anything because I grew up loving Batman, funny enough, is the Riddler. The Riddler is my favorite villain.”

“The Riddler was like a sociopath,” Timberlake added. “He was proper crazy. So if I’m gonna play crazy, I’m wanna play like proper crazy. I'’m ready. The Riddler. Gimme a call.”

While Timberlake still probably carries the boy band stigma for some fans, he's actually been quite successful in his acting career. He's been one of the best hosts of Saturday Night Live in recent memory, and he was great in The Social Network. He is also appearing in Runner Runner with Ben Affleck, which is set to be released on October 4, 2013.