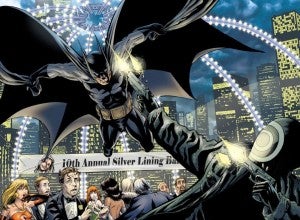 This morning, filmmaker and comics writer Kevin Smith took to his Facebook page to announce details (and share some art) from the forthcoming Batman: Bellicosity, the third miniseries by Smith and his longtime friend and Comic Book Men co-star Walter Flanagan. Flanagan's art, which was widely criticized in the first miniseries (Batman: Cacophony) and much improved in time for the second (Batman: The Widening Gyre), has made another leap forward in this series, which Smith says rounds out their trilogy. The series stars Onomatopoeia, a character Smith introduced during his best-selling Green Arrow run who went on to become a Batman villain in Smith's trilogy. Rumor has it that Smith has a deal in place with DC that no other writer can use the character without his permission. The Batman costume is also looking pretty old-school in this shot, which makes sense--not only is it the third in a series of stories that started before The New 52, but Smith's Batman books have always taken a lot of time to produce and generally have been considered non-canonical anyway. The series will reportedly kick off in the summer. Check out Smith's comments below, and the preview art at right.

"FAT MAN ON BATMAN! "SPOILERS: This Walt Flanagan splash page showcases the Dark Knight and the unnerving Onomatopoeia from ish 1 of the forthcoming conclusion to our New York Times Best-Selling Batman cycle! "A few years back, DC Comics made my dream come true when they let me do a BATMAN comic book mini-series with one of my best friends - COMIC BOOK MEN Stash manager, Walt Flanagan. "It started with BATMAN: CACOPHONY... "It continued with BATMAN: THE WIDENING GYRE... "And in 2013, the blood will run in the final chapter of the battle between Batman and Onomatopoeia ... "BATMAN: BELLICOSITY Summer, 2013"