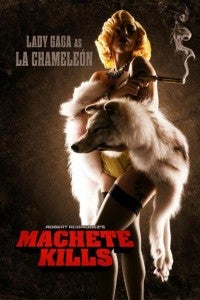 Whether he knew it or not, Joseph Gordon-Levitt appears to have broken the news--at least as far as we can tell with a quick Google search--that Lady Gaga will appear in the forthcoming Sin City sequel, Sin City: A Dame to Kill For.

Speaking in a radio interview with JAMN 94.5, JGL praised the singer's performance, saying, "She's a great actress. And I didn't know that. You know she came in and I was like, 'OK sure, they're having a huge pop star do a scene in the movie, I understand,' but then she came in and like, nailed it! She had her character down, and she was like a total pro and did a great job. I was really impressed."

The nature of her role is unknown but, given the fact that it's a Frank Miller story, there's a better-than-even chance that she's a prostitute or sexy assassin.

Lady Gaga To Appear in Sin City: A Dame to Kill For