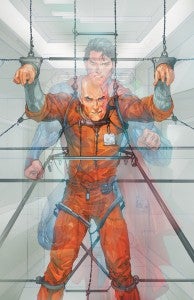 It's been a while since we saw Lex Luthor--five years, to be precise. So far, Superman's most recognizable villain hasn't appeared in the "modern day" version of his story, instead relegated only to Grant Morrison's "five years ago" origin story in Action Comics. But all that is going to change in December, when Superman sees the evil genius--for help. Solicitations released today reveal that the H'El on Earth story will make Superman pretty desperate--desperate enough to visit Lex Luthor, who is apparently perceived as something of an escape risk if the cover at right is any indication, to ask for help. Why? Well, who else would you ask if you needed to know how to stop a Kryptonian? It's mostly notable because many fans have wondered whatever happened to Lex Luthor that he hadn't been a part of the first year of the New 52 Superman title. Well, now (apparently) we know...!