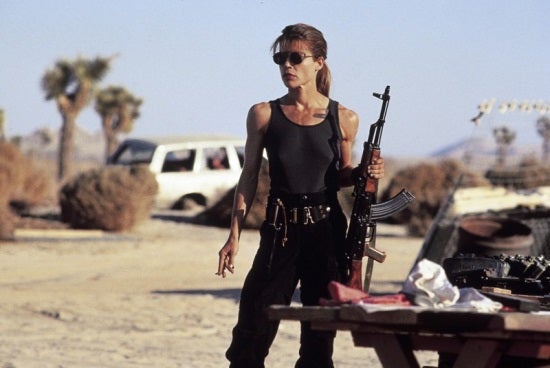 Linda Hamilton will be a recurring guest star during the second season of Defiance on Syfy.

Hamilton will play role of Pilar McCawley, the wife of Rafe McCawley (Graham Greene) and mother to their three children. Separated from her family for a number of years, Pilar has now returned home. Pilar suffered from serious mental illness and in the aftermath of the Votan arrival and subsequent war, did not have access to her medication. With her mental state unchecked, Pilar snapped and tried to murder her children. Fearing for the family’s safety, Rafe sent her to an institution and told their children she had died. Now Pilar is back with both a steely resolve and a warm, maternal love for her family. But the motives for her return are unclear, and soon Rafe and others in town begin to question where she’s actually been these past years.

Hamilton is best known for her iconic role as Sarah Conner in James Cameron’s The Terminator and Terminator 2: Judgment Day. She also starred in the television series Beauty and the Beast opposite Ron Perlman, and has appeared in films such as Mr. Destiny, Silent Fall and Dante’s Peak.

As the story of Defiance resumes, the lives of the townspeople are in drastic turmoil. The Earth Republic has assumed control of the town, with far-reaching consequences including a new mayor.  Nolan traverses the badlands to find a lost Irisa, Amanda has an unexpected new role in the town as she searches for Kenya and the Tarr family desperately tries to keep control of their criminal empire in the midst of dramatic changes.

Defiance is a partnership between Syfy and Trion Worlds and is a convergence of television and online gaming, featuring an interconnected world and storylines that co-exist on both platforms.

The second season of Defiance premieres June 19 at 8 p.m. ET.

Linda Hamilton To Have Recurring Guest Role In Defiance Season 2

Among Us Comes to Super Smash Bros. Ultimate in Viral Trailer