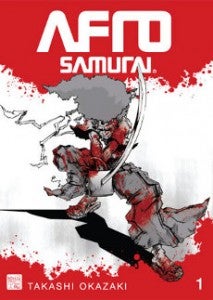 News is leaking out that famous snakes-on-a-plane fighting, Nick Fury-playing actor Samuel L. Jackson will be co-producing a live-action version of the hit manga series Afro Samurai. The project gained traction, thanks in part to two successful and well-received animated pieces stateside in the past three years. News reports say that the producers have given the rights over to The Indomina Group in order to see the project brought to life. With SLJ's help, of course!

There is no word at this time if Jackson will have an actual role in the film itself, even though he did voice the character in the aforementioned animated features. For those unfamiliar with the story, Afro Samurai takes place in a feudal Japan of the future, with the lead character on the hunt for vengeance against the man who took his father's life. Indomina has announced that they plan to attach a writer and a director the project as early as this summer, with shooting to commence in the Dominican Republic in 2012.

Live-Action Afro Samurai in the Works! Thanks, Samuel L. Jackson!