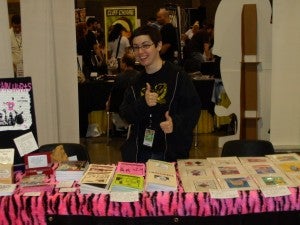 Writer and artist Liz Baillie tends to focus her work on characters and people who may not fully be part of the mainstream. With her previous work on her series My Brain Hurts and her work on her current title Freewheel, Baillie has crafted stories that she says, "Are about outsiders, like urban, New York City teenage punks in My Brain Hurts or in Freewheel where it's a girl who has a really active imagination, no family, who's on her own. I like writing about the underdog perspective on things." Her devotion to her work has helped her establish a fan base that has followed her over the years, starting with her work on her ten-issue series, My Brain Hurts, which wrapped up in 2008. Her new project, Freewheel, is a break from her work on her previous series, "I wanted to do something totally different. My Brain Hurts had a lot of dialogue and hanging out, and I wanted something that had more action in it, and I'm excited about where the book is going," said Baillie. Fan response has grown since the first issue of Freewheel debuted, and issue two has also brought more positive feedback. Freewheel centers around the adventures of a young girl in foster care who wakes up one morning, only to discover that her brother has gone missing. In the process of searching for him, she stumbles upon, as Baillie describes it, a society of hobos who agree to help her in her search. The inspiration for the series didn't come too far from the author's own thoughts and memories. "When I was little, I can remember when I was little telling my mother crazy stuff like 'I'm going to change my name and live down by the river with the hobos.' Of course she didn't believe it, but I think kids have fantasies about having these other lives, that they have other parents somewhere, so that was sort of the origin of this story." Part of the growth of Freewheel can be attributed to Baillie's work ethic and motivation behind how she approaches her craft. "I recently got a studio and I find that to be really motivating. I'm finding that I'm going there and working eight or nine hours a day, maybe more. That has helped a lot, having a space outside of my home that keeps the distractions of working at home away!", she said. Her approach to her work also includes a foreseeable end to where Freewheel is going, and with the next issue of the series due out in September, Baillie is excited about her work, and is grateful to those fans who have stuck with her, and has future promotional work coming up too. "Keep an eye out for me, as I'll be doing a book tour this fall to go along with the release of volume two of My Brain Hurts, and I'm just excited about where we'll be going. We'll be in the midwest, the east coast, and people should definitely come out, as it'll be an exciting tour with my and a couple of other creators too!" Baillie's work certainly speaks to a common experience that many people go through, especially with her focus on younger characters who are sometime grappling with adult decisions and scenarios. Check out her work, her catalogue and more of her background at her website, lizbaillie.com. It's definitely worth a visit!

You Star Confirms They Won't Appear in Season 3