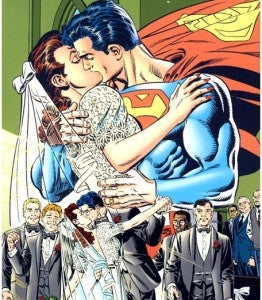 In the closing moments of the Superman 75th Anniversary panel at New York Comic Con today, DC Entertainment Co-Publisher Dan DiDio stoked the embers of long-standing rumors that Superman's ex-wife Lois Lane would get her own comic book series starting in 2014.

"[Superman and Wonder Woman's relationship is] not at the expense of Lois Lane," DiDio said. "We love Lois. It's her 75th Anniversary, too. We have big plans for Lois Lane in 2014, and who knows, her name can look just as good on the title of a comic as Superman's, can't it?"

Of course, she did once have a title: Superman's Girl Friend Lois Lane. It ran from 1958 to 1974 for a total of over 100 issues. More recently,  an alternate-universe version of Lois got her own miniseries during Flashpoint.

The pair were married in the comics in 1996 and then remained that way until 2011, when the New 52 relaunch retroactively removed the marriage and most of their shared history from continuity.