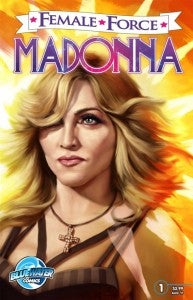 A Madonna comic book is scheduled to arrive in comic book stores on Wednesday, August 17, 2011. The biography comic featuring the Material Girl is being released by Bluewater Productions, which has made a name for itself with unauthorized celebrity biographies.

The comic book is being released right after Madonna celebrates her 53rd birthday on August 16. Madonna was born Madonna Ciccone in Bay City, Michigan in 1958. The comic book autobiography will follow her life from her humble beginning to her rise as a singer, pop-star and businesswoman. Everything from her being a leader in fashion to her charity work will be covered. Female Force: Madonna is written by CW Cooke with art by Michael Johnson.

"Most pop stars owe everything to this woman. It's amazing all of the things that she's done in her lifetime, and I have a feeling that this is still only the beginning," said writer CW Cooke.

Bluewater's Vice President Jason Schultz said, "Our goal is to show the little-known events and influences that resulted in Madonna becoming the phenomenon she remains to this day, more than a quarter-century after she burst upon the scene. A visual medium provides perspective that is not only accessible but more relatable to the average person without losing any of the information involved."

Madonna Comic Book To Be Released Day After Her Birthday