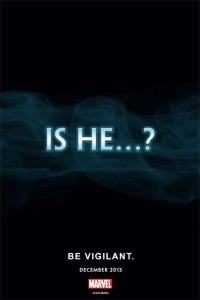 Marvel Comics is teasing something, but just like with many of their teases, it's a big mystery as to what they are teasing. Marvel sent Comicbook.com an image with the words "Is he...?" in the center. At the bottom of the image, the words "Be Vigilant" along with the date December 2013 and the Marvel logo appear.

In addition, Marvel sent the following teaser text in an email along with the image: "The Marvel Universe is on the brink of a major change. Find out more, September 18th!"

Marvel Comics Teases A Major Change To Their Universe