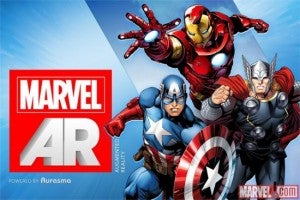 Marvel's first panel of Friday was set to cover their upcoming social media and digital strategies. Arune Singh, Marvel's Director of Communications, moderated the panel with Mark Waid, Matt Kindt, Senior VP of Sales David Gabriel, Director of Product Strategy Kristen Vincent, Executive Editorial Director of Digital Ryan "Agent M" Penagos and senior editors Nick Lowe and Steve Wacker. Starting off the panel, Singh started discussing how Marvel ReEvolution seeks to make their print and digital offerings work together to offer an enhanced experience, rather than being seen as competitors. "We've evolved our products a lot since we talked last year," said Singh. As Singh began talking about the Marvel Digital Comics app, David Gabriel took a moment to share that, through their free digital comic program, Marvel has given back over $200,000 to retailers from the codes redeemed from the print comics. Those contributions will continue through Marvel NOW!'s launch. Emphasizing Gabriel's point, Singh referred to retailers as "the lifeblood of this industry" and expressed that they "couldn't do this without them." Singh eventually moved on to discuss Marvel Infinite Comics, continuing what has become a tradition of inviting a member of the audience up to take a peak at the latest example, starring Spider-Man. Mark Waid, the writer on the first Infinite Comic offering (as part of the AvX event), shared that he's "very passionate and very vocal" about the endeavor. He noted that most digital comics are simply scans of pages, while Infinite Comics seeks to use a format that makes the most of the type of presentation the medium allows. He stressed that it isn't about animation, bad music or voiceovers, but trying to mimic the experience of flipping pages of a "real" comic. Waid noted that, in print comics, the only place creators can surprise the reader is on the upper left corner of the new page you're turning to. With Infinite, they can surprise at any time with any panel. Nick Lowe told the crowd that Yves "Balak" Bigerel, a pioneer in the style of presentation used for Infinite Comics, was a big part of the inspiration to develop the offering. Arune Singh took an opportunity to announce that the Spider-Man Infinite Comic, which ties into the Ultimate Spider-Man cartoon, would be available for free through Sunday on the Marvel Comics app. That led to its writer, Matt Kindt, sharing how fun the opportunity was for him, because he'd seen what Waid had done. He stressed that it was important to him that it was "still comics" and iPads were made for this. During the panel, a steady stream of readers were getting to preview the Spider-Man Infinite Comics and giving it a thumb's up. Stephen Wacker spoke about editing an Infinite Comic and agreed with what others on the panel had said about the format. He shared that this was the largest Infinite Comic released thus far. Wacker, also, showed the crowd the proclamation from Mayor Bloomberg's office that this Sunday is officially Spider-Man Day. The next item for discussion was Marvel Digital Comics Unlimited. Kristen Vincent said that, while 2012 focused on bringing print and digital together, 2013 would attacked "really from a digital perspective." To that end, one of their initiatives will be to port the Marvel Digital Comics Unlimited offering to iOS devices. At a previous convention, Vincent debuted "Marvel Advisors", a way for fans to provide feedback to help guide the development process as Marvel works to constantly improve their offerings. Next item on the agenda was the Marvel Augmented Reality app, that allows readers to unlock extras. Editor Nick Lowe indicated this would be a major area of growth for Marvel NOW! They're always working to provide the most added value, without impacting the readability of the physical comic. He added, "it will really blow your mind, some of this stuff." Editor Stephen Wacker shared that one of his favorite AR items was where they had a doctor explain what would really happen if Wolverine jumped from an airplane at that altitude. Arune Singh shared that some future AR content will feature pro wrestlers sharing why they like the Marvel characters so much. They played one featuring Diamond Dallas Page and indicated Hulk Hogan would be forthcoming. The next item up was their Marvel.com offerings and social media. Ryan Penagos said it was "full service editorial" and described it as being pretty much one stop shopping for all of your Marvel information, from their various podcasts offerings and YouTube shows, as well as his own experience on the set of "The Wolverine". Marvel, also, has a presence on Facebook, Twitter, Tumblr, GetGlue and Pinterest. He indicated they're taking pictures throughout the con weekend to display as exclusives on each of their different presences. The social media talk segued into discussing the Avengers Alliance game on Facebook. There's an AvX event currently going on, where Namor is replaced by Jean Grey in the Phoenix Five, and a PVP event, where players can use Deadpool. Marvel, also, has an iOS game, Avengers Initiative, that does tie-in with the FB game. As they moved on to audience questions, the first led Kristen Vincent to mention that they could possibly look into a way for AR to work with the digital comics, in addition to the physical ones. A fan asking about the Dexter comic was told that, while it is still planned, but has hit a delay that currently has it on track for February. Editor Stephen Wacker said that he'd like letters columns to add AR features, to bring more interaction with the fans. Questions wrapped up quickly, in order for the next scheduled Marvel event to start up in the room.