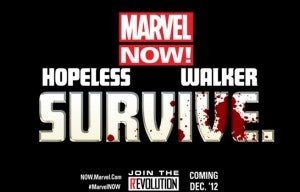 Probably not on purpose, mind you, but the new teaser image just released from Marvel Comics immediately brings to mind The Walking Dead, Image Comics's tale of survival horror.

(Which is doubly odd because there were all those jokes about the Iron Man teaser, which read simply "Invincible," and how that might bring up some associations with Robert Kirkman's other work, too.)

Dennis Hopeless and Kev Walker's last names appear above a blood-spattered word: "Survive." None of that is out of line for Marvel at all, but "hopeless walker" sounds like the way AMC might credit a particularly unique-looking zombie, and the "survive" tag is one that Kirkman has used again and again.

None of this would be germane to anything, of course, except that it's not immediately clear who or what such a teaser might be promoting in the Marvel Universe. Comic Book Resources peg their bet on Darwin of the X-Men, but the font, the black-and-white and the blood...all of that points to The Punisher if you ask me.

Could Frank Castle be on the run, trying to survive following his all-out assault on The Avengers during the forthcoming Punisher War Zone arc, which was heavily teased just before Marvel NOW! was announced?

Hopeless and Walker are also creators on October's Marvel NOW! Point One, so it's possible that this could have something to do with the events of that story, and therefore could be harder to predict from a month or more out. We'll have to wait and see whether anything happens in that book that will make Nick Fury's card deck-file folder team look like "survivors."

One step beyond that, even, you have something that's almost more intuitive: what if the blood splatter here is related directly to the crosshairs on yesterday's cryptic Marvel NOW! teaser, and the forthcoming Daniel Way-Steve Dillon title is somehow connected with the Hopeless/Walker book teased here? Given that they started this campaign midweek rather than on Monday as Marvel traditionally does with these series of teasers (or, let's say Tuesday on account of the Monday holiday), it doesn't seem too farfetched.

Guardians of the Galaxy's Gamora Was Almost Blue in the MCU