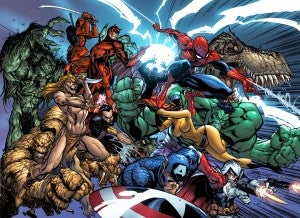 According to rumors being reported by Bleeding Cool, Marvel's rumored relaunch will go by the name of Marvel Now!, so that when a number of their biggest titles start over with new #1 issues later this year or early next, it will have an easily-brandable label not unlike DC Comics' The New 52.

The site also points out that, perhaps in a bit of playful malevolence, DC Comics has a "DC Now" panel planned for San Diego's Comic-Con International, which begins in just over a week.

Bleeding Cool has reported a number of major changes planned for Marvel titles in the coming months, some of which we've reported as well and some not. They include re-launched titles with major creative changes for Captain America, Hulk, Wolverine, Iron Man, Fantastic Four and Avengers, among others, and altogether new series introduced for characters like the Guardians of the Galaxy, Nova and something called "Uncanny Avengers." Bleeding Cool suggests that, following last week's surprise announcement of Punisher War Zone's return, we might get some confirmation on at least some of these rumors before Comic-Con.

Rumors of a Marvel relaunch have been flying ever since the launch last September of DC's New 52 publishing initiative, although it's worth noting that nobody at all is suggesting Marvel will reboot their continuity or timeline the way DC did. It's more likely that these will just be fresh starts with new creative teams launching with #1 issues as a result of the Marvel Now initiative. It will also serve as an opportunity for new stories to launch coming out of Avengers vs. X-Men and the rumored Brian Michael Bendis "cosmic" universe.