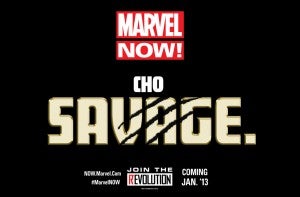 Frank Cho, the fan-favorite artist behind indie hits like Liberty Meadows as well as a handful of projects for Marvel in recent years, will be the next creator to take on a Marvel NOW! title and, unless we're forgetting someone, the only creator announced so far to take on both the writing and art chores on a title.

What's that title? Marvel's not saying, but there's really two ways it could go, based on the teaser image at left.

Either the title is a new Wolverine series, which jives with gossip that's been going around the Internet for quite some time now thanks to news-and-rumor site Bleeding Cool--or it's Marvel having a little bit of fun at Bleeding Cool's expense and setting up an announcement to look for all the world like it's meant to be Wolverine when in fact they're planning a bait-and-switch.

The latter would be a lot of fun, actually, and would lend some spontaneity to the announcements at New York Comic Con, which so far appear to be pretty predictable unless there's a Sandman-style surprise in the offing. But it's more likely than not the former--which could still be interesting. A character like Wolverine seems a touch out of Cho's wheelhouse, but his tendency to hang around with beautiful, young women is more up his theoretical alley.

The New York Comic-Con begins next Thursday, October 11, and runs through Sunday the 14th. Look for much more on this and other projects as the weekend draws closer and then at the show itself.