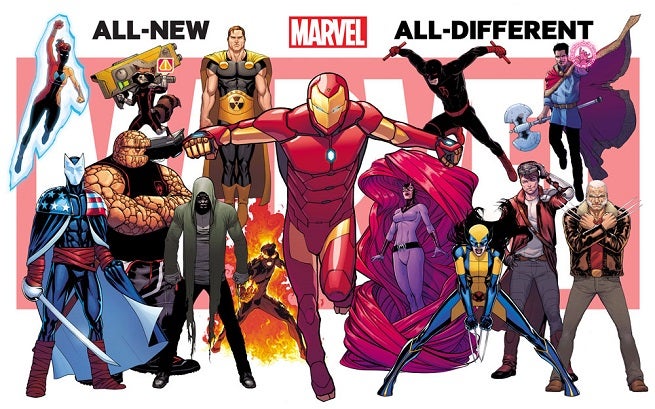 Well...scratch all that, now. This second teaser image is a bombshell, featuring more than a dozen characters, almost none of whom are looking quite like we remember them.

So, who are they? What's going on? Let's try and make some sense out of it, going loosely from left to right.

(Doctor?) Spectrum - It's been said that Spectrum had big things coming up after the Secret Wars event.

But is this the Monica Rambeau we know and love -- or someone else? It looks a lot like Dr. Spectrum from Earth-4290001's Great Society, a pastiche of DC's Justice League. Certainly with the importance of DC's Avengers analogues The Retaliators in The Multiversity by Grant Morrison, it wouldn't be beyond possibility for known Morrison fan Jonathan Hickman to bring something similar out of Secret Wars.

As Doctor Spectrum was left on Earth-616, she's the only survivor of hers, following its destruction at the hands of the Illuminati. So...maybe don't expect her to be particularly cozy with The Avengers or other teams that have members of that group on staff?

Citizen V - Again...is this "our" Citizen V? It's a legacy name and we can't know until we see where the story finds him whether it's actually John Watkins III. Or, if we're really lucky, it's Baron Zemo.

The Thing - Well, check out those fancy new duds on the ever-lovin', blue-eyed Thing. Looks like he's headed to space with the Guardians of the Galaxy following the fall of the Fantastic Four.

Rocket Raccoon - Here he is -- and he's flipping off the camera, the middle finger being censored, a bit like the "offensive gesture imminent" thing from the Guardians of the Galaxy movie trailer.

Karnak - The mystery hooded figure is Karnak - how he's back we'll have to find out.

Hyperion - This looks to me like the Planet X version of the character, although it's admittedly been a while, so it's possible that his main Marvel Universe counterpart has taken on a similar outfit and I just didn't realize it.

Inferno - He isn't the Human Torch as far as we can tell...but he's an Inhuman, as is Torch in the All-New, All-Different Marvel, according to rumors.

Medusa - The queen is one of the most important and recognizable of the Inhumans.

Iron Man - We'll skip too much real analysis here since we talked about him -- it's an identical image -- in the previous poster.

Wolverine II: Electric Bugaloo - While this might look like Wolverina from MC2, the two claws seem to confirm that the new Wolverine is X-23 in a wolverine costume.

Star-Lord - Along with Iron Man and Rocket, one of the only characters in the image who seems to be relatively unchanged.

Dr. Strange - Anybody have any idea as to just what that axe is? We're guessing it's important. Our best guess is that maybe it's the Bloodaxe, an Asgardian weapon once wielded by Thunderstrike, although as long as Thor Classic is also wielding an axe instead of Mjolnir, that might feel like too much of a good thing.

Old Man Logan - Taken from the pages of a popular alternate-reality story from the creative team behind Civil War, this appears to be the version of Logan we will get now that X-23 is wearing the Wolverine suit. It's a bold and unusual choice.

Where to Watch A Charlie Brown Christmas This Year