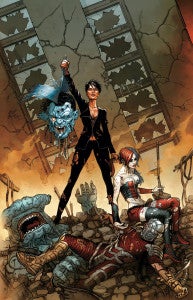 The writer--who says he recently turned down a very attractive offer because it would have been too much work given his significant current load, started working on Suicide Squad at the start of the Forever Evil event in September, just as Ales Kot left the title.

"It's just for Forever Evil and then I'm done," Kindt told CBR. "It's one of the things I'm scaling back on, because I don't have time. It's driving me crazy to do so much. I knew I could do a finite amount of time on that and do it well, but I can't sustain it for that long and make it good, still -- 'for sure' good. There's a chance it could be good. I told my editor, 'At a certain point, it's just going to be like flipping a coin -- it could turn out alright or not, depending on how I'm feeling that day.' It's better to take a little bit of time off and recharge my batteries."

It's a departure from back in July, when Kindt talked to ComicBook.com at San Diego Comic Con International. Back then, he joked that he wasn't turning anything down, but said that he particularly liked the fit with Suicide Squad.

"Honestly, I liked the book in the ’90s when Ostrander was writing it. I went back and dug those issues up because I remembered liking it. What’s funny is as an adult, I haven’t read those for a long time and then I get reacquainted with it and it’s like, “That’s the stuff I grew up on. It sort of informed who I am now,” Kindt told us. "So I think I’m attracted to the book because I liked it and also the creator-owned stuff I do is also sort of informed by some of that stuff I read when I was a kid. Definitely I love that book and I’ve always liked it. I’ve read the new stuff and I like what he was doing right before me–those issues are great. I feel like I have to live up to the good stuff that’s already happened and hopefully I do."

But even back then, he wasn't sure that he would remain on Suicide Squad for the long haul.

When we asked whether he was the new, regular writer or just the one to tackle the crossover, Kindt admitted, "I can only speak for the first five issues because that’s the only thing that’s really set in stone. After that I have ideas that I’ve pitched and outlined and everything, so we’ll see. Those first five issues are going to be kind of messed up because of Forever Evil–and not messed up in a bad way, but messed up in that the villains are messing everything up so it’s going to be interesting having villains on a team of heroes and what are they and where’s their incentive? Everything’s crazy–Belle Reve is going to be falling apart for a while and they’re all scattered to the wind so it’s like, how does Amanda Waller get this group of outcasts to work together? There’s no incentive anymore. Part of the fun is trying to figure out what is their motivation going to be, and who’s going to go against them. I sort of have a reverse Suicide Squad–a team of good guys who are forced to do bad that they’re going to end up fighting and I think that’s going to be fun."

Kindt, who was best known for his creator-owned work before he took over Frankenstein, Agent of S.H.A.D.E. from Jeff Lemire and began a lucrative relationship with DC Comics, describes himself as moving back in the direction of creator-owned work. He said that, in addition to continuing work on Mind MGMT at Dark Horse, he's got at least two other creator-owned properties lined up for 2014.

One of them is the recently-announced original graphic novel Poppy! and the Lost Lagoon, which he'll be writing with The 6th Gun's Brian Hurtt on art. That will be the first of a series of new graphic novels aimed at children, and follows the story of Poppy Pepperton, a ten-year-old girl with a typographic memory who goes on globe-spanning adventures with her sidekick Colt Winchester (who thinks he’s her legal guardian).

DC Comics's April 2014 solicitations, which cover the first new books following the conclusion of Forever Evil, are expected to reveal quite a few major shifts for their books.