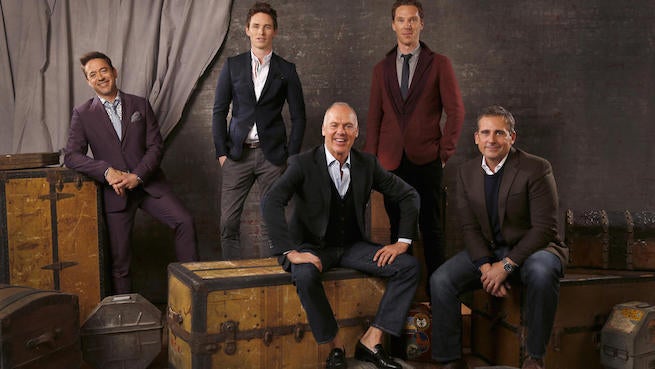 While many fans have imagined what Bruce Wayne and Tony Stark would discuss upon meeting, few probably would’ve guessed that the most pressing topic would be the challenges of their respective costumes.

Both Michael Keaton and Robert Downey, Jr. recently appeared on Hollywood Sessions and had much to talk about, Yahoo Movies reports.

Warning: The following clip has adult language and is NSFW.

Keaton starred as the Caped Crusader in Tim Burton’s 1989 blockbuster, Batman. His current film, Birdman parodies the success of the Batman movie. Downey will be reprising his role as Iron Man in The Avengers: Age Of Ultron next May.

“What nobody understands either, is that you were the guinea pig for the [first version] of all of those suits – which by the way, twenty years later, I’m told only got infinitesimally more manageable and comfortable,” Downey tells Keaton during the roundtable.

“I’m very claustrophobic,” Keaton recalls of the Batsuit. “The first time I was locked in [to the outfit], I thought, ‘This is never going to happen’ … but this fear ends up working perfectly for the character.”

Hollywood Sessions features actors in conversation with Los Angeles Times writers. It airs on EPIX on Monday night at 8pm ET/PT and is available to stream on Epix.com.