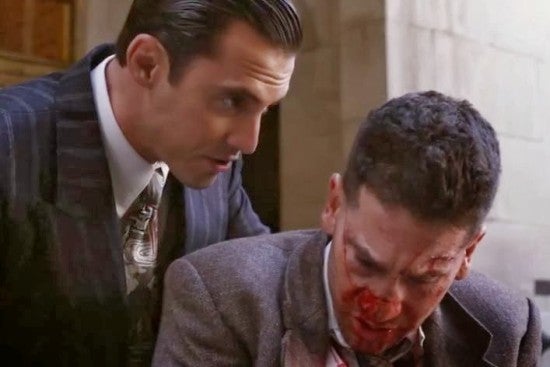 With the debut of Mob City, Frank Darabont's new organized crime series for TNT, coming up on December 4, actor Milo Ventimiglia will play mob lawyer and "fixer" Ned Stax, a confidant of boss Mickey Cohen and one of the show's central characters.

It's the second time in not that long that Ventimiglia has taken a lead role in a hugely-anticipated series--the first being NBC's Heroes, which debuted back in 2006 and ran for four seasons. Beginning as a critically-acclaimed and highly-rated series, it made stars out of Ventimiglia, Hayden Panettiere and Star Trek's Zachary Quinto and its first season is still widely regarded as some great television.

It was all downhill after that, something that's often blamed on the show's own success. It was originally supposed to follow one group of super-people through each season, exploring the world they had built, and instead ended up lingering on the same group throughout the series because Ventimiglia and company proved popular with the viewers and the network was hesitant to replace them.

So, how does Ventimiglia compare working on the two projects?

"You know, I think both the shows were pretty anticipated, I think they were things - subject maters that people wanted to explore and be a part of and watch, so there was that - that anticipation," the actor told reporters on a conference call this week. "But also, you know, just the major difference was, you know, thematic. I think Heroes was a show that was huge, huge and it reached such a vast audience, whereas, you know, Mob City may feel like kind of, you know, anybody that’s been to an noir-esque or a 40s-esque drama, you know, it’s only going to them, but you see the cast assembled and everybody knows Frank’s work and it like, well, shit, that’s just going to be interesting and awesome and dynamic and exciting and nothing short of brilliant, hopefully - you know, there two different, you know, fruits in the market, Heroes and Mob City but they’re the same thing. It’s like - it’s good television, good programming, good stories and great characters."