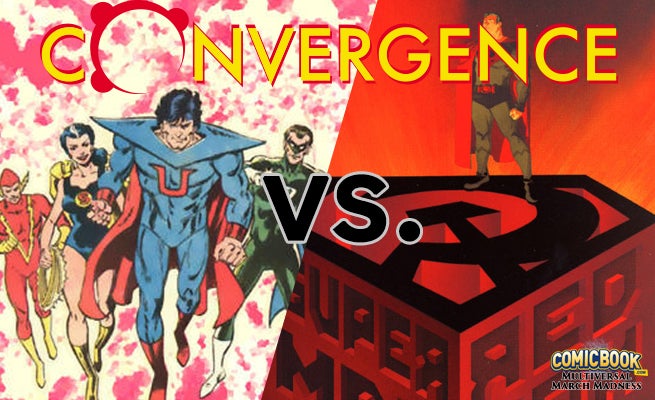 The opening rounds of ComicBook.Com's Multiversal March Madness continue! Though DC and Marvel Comics are breaking the piggy bank on their endless realities with events Convergence and Secret Wars later this spring, the bracket fever from the NCAA March Madness has our minds stuck on the tournament style crossover event.

Stats: Instead of crash-landing on the sunny fields of Kansas, Superman's Kryptonian rocket ship descends into Soviet Russian during the height of the Cold War. Growing into the Communist's ultimate weapon, Soviet Superman rules this world with an iron, if somewhat compassionate, fist.

Weakness: Capitalism, or any ideal favoring the individual over the common collective. Unfortunately, the crime Syndicate are the multiverse's greediest lot.

Stats: A mirror universe where the Justice League is repped by bunch of stone-cold thugs, and the Earth's only protector is Alexander Luthor. With Ultraman, Owlman, Superwoman comprising this earth's nefarious trinity, bad is good, and good is as good as dead.

Strength: Complete disregard for life or civilian casualties. These guys will do whatever to whoever they want in order to further their goals.

Weakness: A general inability to work as a team, which leads to constant in-fighting. This could create several problems for the Syndicate, especially against Red Son Superman's unified and controlled army.

Will the Soviet Superman crush the rebellious League, or will Crime win the day? Decide in the poll below!