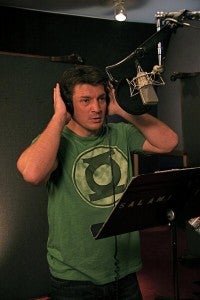 The man perhaps most frequently requested to star in a superhero movie--Castle and Firefly star Nathan Fillion--apparently has developed back problems that would make many of the stunts required to play a character like Ant-Man difficult. The actor reportedly is suffering from chronic back problems and seeing a chiropractor, according to Deadline, but today he was feeling poorly enough that for the second time since Castle entered production on its sixth season, he called in sick. Many industry observers felt that it may have been a ruse the first time around--he was in contract negotiations, and missing the show's star caused filming to shut down altogether for a day--but, at least this time, reps for the star claim it's his body that's giving out. This time around, ABC Studios had enough advance notice of his condition to rearrange the schedule to shoot around Fillion, who is expected back at work on Monday.

Nathan Fillion Absent From Castle Set With Back Problems