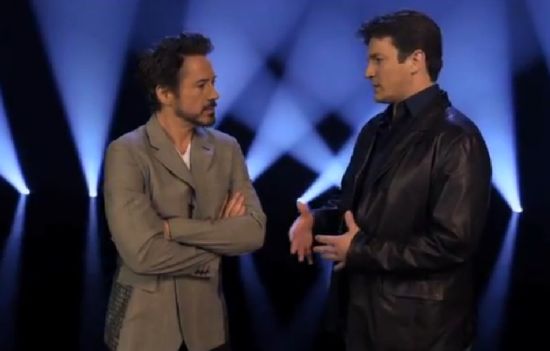 In an MTV News interview at the Toronto International Film Festival, Castle and Firefly star Nathan Fillion suggested that it's not likely he will be able to star in Guardians of the Galaxy, in spite of the involvement of Joss Whedon and James Gunn, two filmmakers with whom he has a close relationship.

"[Gunn and I] had dinner the other night and he told me all about it, before everyone found out," Fillion said (video below). "I was on the inside on that one. Over some toro, tuna belly, we discussed how excited he is, how nervous he is, but how he wanted it very badly. He wanted it very badly. I think it's in very capable hands. It's in the right hands. Having worked with the man, I know what he's capable of."

Joss Whedon, another person who's got an inside track on the Marvel films, has expressed his confidence in Gunn, saying that his "twisted" take on the Guardians of the Galaxy sounds very promising.

But does that mean Fillion is eager to star? Well, whether he wants it or not, the actor seems to suggest it would be difficult to pull off as long as he's got a show on television.

"I'm very busy right now with a job that I'm grateful for," Fillion said, speaking of Castle. "I've made a commitment and I have to see it through. And I'm really happy to."

This would theoretically apply across the board to Marvel films, which are not only intensive shoots but which generally require the stars to sign on for multi-year, multi-film deals that can be pretty restrictive to outside work. That could upset fans beyond just Guardians of the Galaxy, as many have speculated hopefully that Fillion would make a great Ant-Man. Still, that film doens't have a firm date to start shooting, so if Castle should end its run in the next few years and Ant-Man runs late, anything is theoretically possible.

Nathan Fillion Probably Won't Star in Guardians of the Galaxy, Has Faith in Gunn