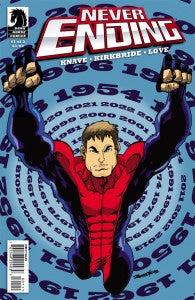 With the release of Never Ending #1, due in stores tomorrow from Dark Horse Comics, the Amelia Cole writing team of D.J. Kirkbride and Adam P. Knave make a move on superheroes.

More specifically, on the superhero. In his world, Chuck (no superhero name) is essentially Superman; he's the big cheese, and he's been fighting a mad scientist (sometimes in a suit of armor) for decades. What's his problem? Well, he's functionally immortal and is tiring of his friends and family dying all around him while he just lives on. His solution? Ask his arch-nemesis for help.

Help killing him, that is.

Kirkbride and Knave joined ComicBook.com for a discussion on the series, a three-issue mini that debuts tomorrow at comic book stores and on the Dark Horse app.

ComicBook.com: What made you guys bring this to Dark Horse? I mean, you've been doing pretty well at Monkeybrain. Is it just the similarities that it seems to have to Edison Rex?

DJK: Never Ending had been in development before MonkeyBrain came into our lives, so it wasn't an option when Adam, Robert, and I first started talking. When we first heard about Edison Rex from Chris, I did have an "Oh crap...!" moment, but I believe you told him about it, Adam, and we all felt comfortable that the ideas, aside from a very basic, ground-level component, were completely different, right?

APK: Yeah. A lot of stories use the same first building block and go wildly different ways. Edison Rex is fantastic, I love it, but we aren't telling the same tale Chris Roberson and Dennis Culver are, at all. Certainly not in tone, but also very much not in specifics.

ComicBook.com: Is it really difficult, bringing something new to the superhero genre these days? I feel like there are so few books that succeed at it, while most of the mainstream superhero books get to bring in new characters and ideas but almost nobody brings in a whole new big-I Idea. 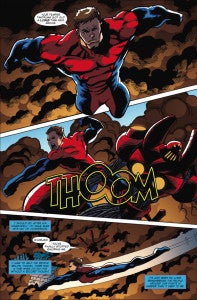 APK: You can't worry about it, I think. When you have a story that speaks to you, that needs you to tell it - you tell it, regardless of genre. That all comes later. The first job is to be true to the story and thinking about it being new or standing out is secondary, because, realistically, if it sparks you chances are it is new - at least in the way you'll approach it.

ComicBook.com: How did this concept come together? Was Robert part of the original brainstorming or did you guys take it to him as "We need an artist"?

DJK: The initial concept was something that I'd been thinking about during a particularly navel-gazing moment, I suppose...Death has always freaked me out, but immortality, either on Earth or even a never-ending afterlife, has always terrified me in a way, too. It's been explored many times, but I feel all of us humans are unique little snowflakes, so my hope was to bring a different take on it just due to having a different brain than anyone else. I think Robert and I started talking about it not long after POPGUN 4 wrapped, and then I asked Adam for help because the story felt too dark and bleak. We'd been writing together a lot at that point, and he immediately took to the concept but also saw what it was missing -- what he could bring to the table. Suddenly, this story about an immortal superhero who just wants to die after outliving all his loved ones, was also filled with excitement, fun, and a little glimmer of hope.

APK: I am a little ray of sunshine. It's true. 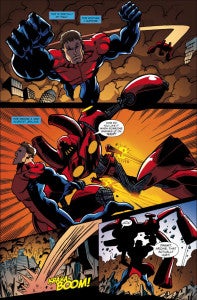 ComicBook.com: There's a lot of exposition in this first issue. Was that a style choice or was it just necessary to get a lot of information out to set up the rest of the story?

APK: There's a lot going on and a lot of world building to do. Also, Chuck is very introspective, which lent itself to following his thoughts more than some other stories might. It became the style of the story as we sat down to see how we could make everything work. And it shone, wonderfully. I don't view it as exposition since it is all shot through Chuck, and how he viewed it. It isn't just an info dump, it all teaches you about his character along the way.

DJK: That's definitely the hope. Chuck is introspective at this point in his long life because he's been physically twenty-five for almost ninety years, having outlived his closest loved ones and knowing that the same will happen with his grandkids and great grandkids. This series is as much about him looking back as it is about his deal with the devil, aka Archibald.

ComicBook.com: Obviously you guys had a lot of fun with the period costumes. What was your favorite era to design, and will we see flashbacks where the character's personality is reflective of the times or is it really the same guy with different looks?

DJK: We talk over basic ideas with Robert, and then he ran with them. I know he really enjoyed designing all of Archie's robot suits, and it really shows. I'm hoping that in the trade we can show off some of his unused concepts, because they are all super cool. With the Chuck designs, Robert did a great job of capturing the feel of the eras without aping anything or altering the basic style he's chosen for this book. It's really impressive watching that guy work, and we're lucky to have him creating this adventure with us. 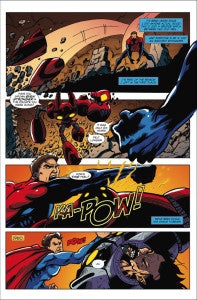 ComicBook.com: In terms of franchise-building, your premise really doesn't lend itself to being something that promises more miniseries to come. Was it hard to sell a publisher on an idea like this?

DJK: Dark Horse was very receptive to the idea, as were other folks I'd casually talked to long before the series actually came together. I think publishers aren't necessarily turned off by a finite idea anymore, as the three issues will be easy for someone who maybe doesn't want to make a lifetime commitment to a book to read, and then the collection will be something that can be recommended and read as a done-in-one, which is nice for bookstores. Having said that, if the call comes for more, we have ideas that'd work without contradicting or negating anything in this story.

ComicBook.com: And if everyone falls in love with Never Ending, what do you do? I mean, I'm just assuming Chuck dies, although that might be a false assumption.

APK: If everyone falls in love with the book what we do then is thank them. There's a world we're building and if asked to do more in it, there are certainly stories. With whom and how are questions we certainly can't answer yet.

DJK: Spoilers and all that! But we will have ninety years of superhero fun with Chuck that we barely scratch the surface on...and, yeah, I can say no more for fear of spoilers. In the end, though, regardless of the potential for future stories, if everyone falls in love with this 3-issue series of Never Ending, we'll all be very happy. Very happy indeed. 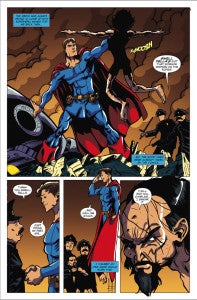 ComicBook.com: How much backstory did you go into for these characters? I'm always interested when you see something like The Life and Times of Savior 28 or Edison Rex to see the elaborate universes that guys create for their characters.

DJK: We got into backstory quite a bit, as the backstory is also kind of the story with Never Ending. Adam and I made a timeline for Chuck, Archibald, Ellie, and Harrison...it's all mostly Chuck's timeline, but we know when everyone was born and when the major events happened. We had to do that, as the story jumps around so much. Being a finite series, we didn't go into it quite as much as we might have if it were ongoing, but we did develop a pretty rich backstory, so we'd know what we were talking about at all times. It was pretty fun to do, actually.

APK: It was, and was one of the most meticulous bits of time line work I've done. We had to have every year for every character worked out, at least in a general rough line for blocking. That, of course, lent itself to backstory, as since we found ourselves needing to know where everyone was it told us more about who they were and why they did things. So it was a great experience fleshing out the world and the time frames.

ComicBook.com: Re-reading my questions and your answers, it occurs to me that I'm the opposite of a lot of readers; I love the concept of superheroes, the tropes and all that but maybe not so much specific characters. I enjoyed Savior 28 and Edison Rex as much or more than almost any Big Two superhero in the last ten years. Is there a different approach, do you think, in telling a story "using superheroes" versus telling one using superheroes with their own baggage? 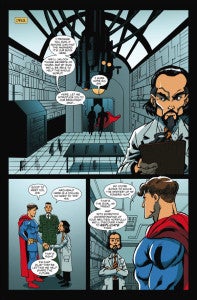 APK: We have no history to worry about except what we bring to the tale. So in that respect it is freeing. Though, certainly, that history and legacy brings its own rewards when used right.

DJK: I love superheroes, too, and grew up with the "big two." Superman is not only my favorite superhero or fictional character -- he's my favorite anything ever. There is something appealing to the idea of adding to that legacy, all politics and real world issues aside, but I've never done it. For me, having not delved into work-for-hire work yet, it's all about the story, regardless of genre. Both styles of stories and writing definitely have their own challenges and also their own rewards, as Adam basically just said much more concisely.