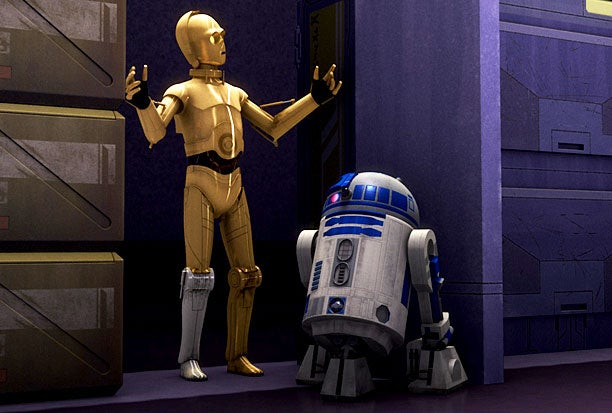 Disney XD have released a pair of new clips from Star Wars Rebels, including one that sees Kanan face off against The Inquisitor, as well as a behind-the-scenes conversation with showrunners.

You can check them out below, along with the official writeups from the Disney XD YouTube page.

As the time period for Star Wars Rebels is close to A New Hope, the show's creators wanted to match the visuals accordingly. For Aron, this was especially important with the look of the lightsaber. "That's the one thing that represents being a Jedi," he says. "I wanted the lightsaber to have that same type of feeling and energy it had in A New Hope." Through extensive research, including conversations with original lightsaber creator Roger Christian, Aron figured out how the Jedi weapon was originally created. As a result, Kanan's lighstaber blade closely resembles those found in the original Star Wars, from glow to a slight vibration.

In this clip from Star Wars Rebels, Hera and Sabine investigate an abandoned base and make a big, deadly discovery.

In this special preview clip from Star Wars Rebels, the evil Inquisitor takes on Kanan and Ezra, looking to destroy the two Jedi. A menacing fighter, the Inquisitor seems well-versed in Jedi history and lightsaber technique, and relishes toying with the Force wielders.