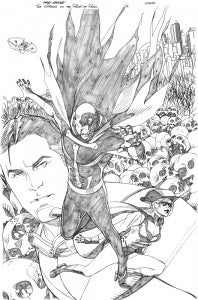 Fans still irate over DC Entertainment's decision to make Before Watchmen may be gearing up for another round of verbal sparring today, as artist Chris Sprouse has blogged the first images from Tom Strong and the Planet of Peril, an upcoming miniseries from DC based on the America's Best Comics character created by Alan Moore while he was working at WildStorm. The story, which Sprouse says doesn't have a release date yet, will represent the first Tom Strong series launched since DC terminated its WildStorm line, and the first series featuring ABC characters that DC has published since League of Extraordinary Gentlemen: The Black Dossier, a project that represented one of the company's many falling-outs with Moore. Moore is often perceived as intractable, thanks in no small part to his many angry comments directed at DC and at Hollywood over their treatment of his work and a number of what he perceives as broken promises. Still, his projects tend to continue on without him, even the creator-owned ones, as he's more likely to sign off on a miniseries to benefit his collaborator than to obstruct one to hurt his perceived foes. In an interview Moore gave George Khoury in the book The Extraordinary Works of Alan Moore, he famously said that he had agreed to continue working on the ABC line after DC acquired WildStorm (a move that put Jim Lee in position to be the Co-Publisher at DC, a role he still holds) because he felt abandoning the projects he had initiated would be a betrayal of the artists who were slated to work on them with him. He and co-creator Kevin O'Neill have taken League of Extraordinary Gentlemen elsewhere, writing a recent miniseries for Top Shelf, and are expected to follow it up with a series based on Captain Nemo's daughter, set in the world of the League. Tom Strong and the Planet of Peril will be written by Paul Hogan and inked by Karl Story. [gallery link="file" order="DESC" columns="2" orderby="title"]