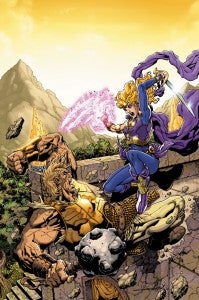 With only an issue on the stands so far, it's difficult to guess exactly where Christy Marx and Aaron Lopresti will take Sword of Sorcery, the new series they launched during DC Comics's New 52 "Zero Month" starring Amethyst, the princess of Gemworld. Certainly so far, the book is a bit more grounded and less fantastical than the last time Amethyst had her own title, with an attempted sexual assault depicted in the first book and a general feeling that we're looking at a movie-friendly fish-out-of-water premise. But today at DC's The New 52 panel, a little light was shed on the subject. Sword of Sorcery is going to be a lot like HBO's popular series Game of Thrones, based on comic book fan George R. R. Martin's massively successful Song of Ice and Fire novels, panelists told the audience at New York Comic Con this afternoon. The title will feature "dynastic intrigue" and family power struggles.

New York Comic Con: Sword of Sorcery Will Be Like Game of Thrones