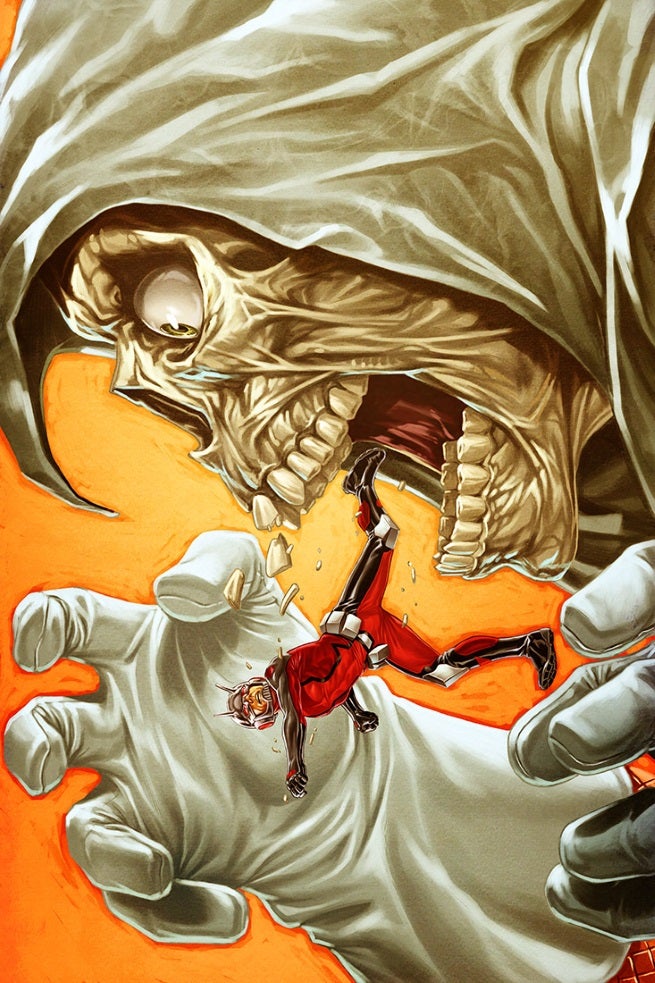 Next year will be a big year for Scott Lang. The character will be featured in the Marvel Studios’ film Ant-Man, played by Paul Rudd, and he’s getting his first ever ongoing series from Marvel Comics. Ant-Man is written by Nick Spencer and drawn by Ramon Rosanas, and Spencer shared a bit about what’s in store for Scott when the new series kicks off in January.

Spencer made the announcement that Scott’s daughter, the former Young Avenger Cassie Lang, will be making her return in Avengers World #16, giving Scott a second chance at being a father, and getting to the heart of what make Scott Lang a unique character, being a superhero single father.

“That’s a big focus for him. At the same time, in his own life…he’s trying to build from the ground up, start from scratch,” says Spencer.

Will she return to the life of a superhero, as Stature?

"Doing a book that's big and bold and very widescreen but allows for humor and poignant character moments, like you'll see between Scott and his daughter, was really the goal,” added Marvel Editor-in-Chief Axel Alonso.

Spencer reveals that part of Scott’s new lease on life means moving to a new city, Miami. “It’s such a great setting for a comic,” Spencer said, “It just looks like a comic city.”

"I've got a million ideas for what the Marvel Universe version of Miami looks like, and the kind of stories that can bring out. It's just like Marvel Universe New York -- you take true elements of a city, and blow it up. It'll be a Miami that people recognize, but just blown up 10 times. It struck me as the perfect place to set a book. When you're in the city, there are just are all these primary colors and the neon, you can just see how fun it is of an environment for your stories. And it's a port city, obviously, it's a very international city. For me, I did a lot of this on Avengers World, on a global scale, but it’s true within the states as well, I'm always interested in getting out of New York. As much as I love Marvel New York, I get excited when Venom goes to Philadelphia, things like that. For me, it's interesting to see the other cities, and I know its fun for fans in the cities, as well."

Though he may be based in Miami, Spencer says Scott will still be doing some travelling. “"We're going to play around, and make the most of our new location."

While Cassie is the biggest news, she’s not the only character that will be having an effect on Scott’s life. Through the call, Spencer hinted that Darla Deering, from FF, and both of the other men to call themselves Ant-Man, Hank Pym and Eric O’Grady, would be making appearances at some point during the series.

And then, of course, are the villains. As revealed by Mark Brooks’ cover to Ant-Man #3 (seen above), Spener will be utilizing his “go-to” villain, Taskmaster, to challenge Scott Lang.

"I really like his voice, and what he brings to the table,” Spencer explained. “He's as close as Scott has, in a lot of ways, to an archenemy. The two have faced off a bunch of times, so we decided to have some fun with that, and I’m sure it won’t be the last time he pops up in the book."

Spencer went on to say that he wouldn’t be stopping with Taskmaster.

"Establishing a full rogue’s gallery for Scott was one of our top priorities," he said. "There are going to be a lot of villains, some new, some old. I hope that we build up a nice gallery for him, because he certainly deserves it."

With Spencer’s cult favorite Marvel series, Superior Foes of Spider-Man, having just wrapped, Spencer assures fans of that series that they will find plenty to love in Ant-Man, but it’s not a straight comedy either.

"I think fans of [Superior Foes] will find a lot to enjoy here," Spencer said. “I looked at books like Ultimate Spider-Man, and the Waid/Samnee Daredevil stuff. Very good, quintessential superhero stuff. I wanted to make sure that we had ingredients of that in here as well. It’s sort of a hero’s journey, but with stuff that can make you laugh along the way, hopefully.”

As for the series’ art, Alonso assures readers that Ramon Rosanas is firing on all cylinders.

"Ramon doesn't take a panel off," he says. "His pages are very dense, they're very detailed. He really makes you feel like you're in a lab, the everglades. He moves the camera very well. When Nick suggested the change of venue for Ant-Man, I knew this was exactly the kind of detail that Ramon could handle."

Ant-Man #1 will hit store shelves January 7. Check out a preview, and Skottie Young's variant cover, in the gallery below.