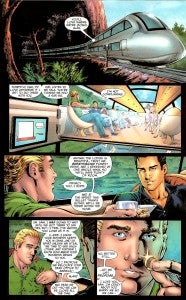 When Alan Scott popped the question to his boyfriend Sam in Earth 2 #2, many fans wondered if DC Comics would soon be following in the footsteps of Archie Comics and Marvel Comics. But alas, it looks like a gay wedding isn't in the cards for Earth 2's Green Lantern, at least not anytime soon. If you haven't already read Earth 2 #3, then be warned that spoilers follow (but these spoilers were already revealed anyway in DC Comics official preview for the issue). On the second to last page of Earth 2 #2, Alan Scott pulled out a ring and told Sam, "I love you, Sam. I'm crazy about you. Marry me so we can…" But before Sam could give an answer, the next page showed the bullet train they were riding on exploding and careening off it's tracks. Well, it's no surprise that Alan Scott survived the fiery scene, but what about his boyfriend Sam? And if Sam survived, what would his answer be to Alan? It turns out we will never know if Sam would have said yes, as Earth 2 #3 reveals that Sam did not survive the crash. Of course, it is comic books, where people don't always stay dead, so who knows what the future may hold.

No Gay Wedding For Green Lantern