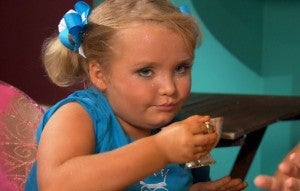 Apparently, somebody at IDW needs to more clearly telegraph when they're telling a joke.

Or maybe those of us in the comics press just need to learn to read one.

With a number of Mars Attacks one-shots coming up soon and even more Mars Attacks variant covers featuring characters like Cerebus and Strangers in Paradise, a throwaway joke made at both Long Beach and New York Comic Con panels, got away from them a little.

The result was a Mars Attacks Honey Boo Boo rumor, which started at news and gossip site Bleeding Cool but took off on social media and now has a full page of Google results before you start to hit stories that don't relate directly to the rumored comic book miniseries.

It seemed unlikely--after all, if this was announced, why wouldn't there be any preview art, or a press release? Say what you want about the intellectually bankrupt nature of the reality show--it's wildly popular and would likely be hugely promoted if it did exist.

And it doesn't. ComicBook.com reached out to IDW Publishing for a comment, and it came back "Nope, this does not exist!"

That's a shame. I guess we'll all have to settle for Archie Meets Glee.

No, Mars Attacks Honey Boo Boo Is Not A Thing