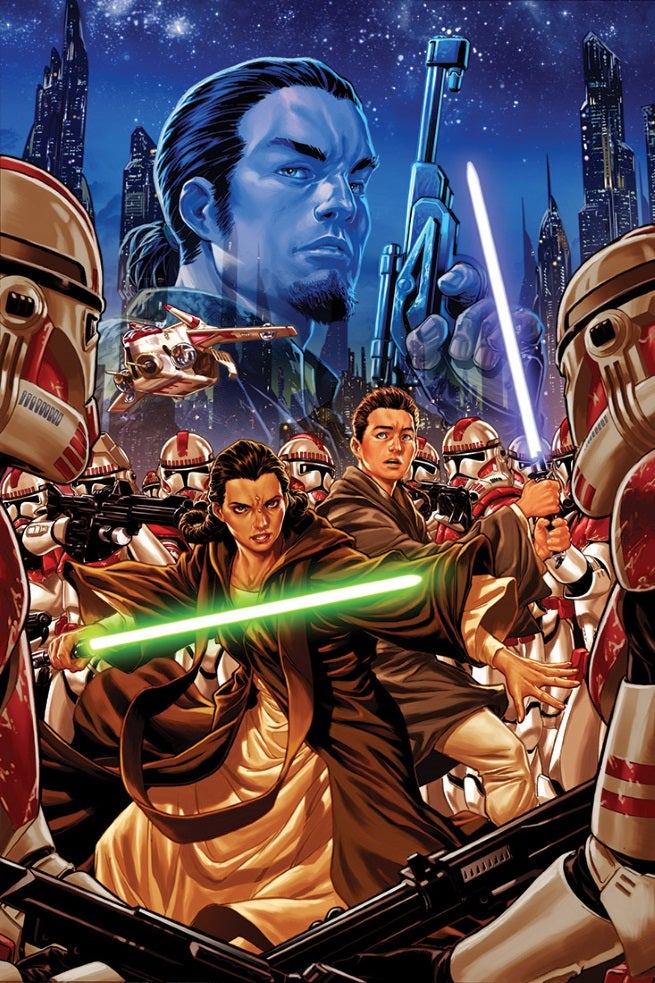 But the new series, titled Star Wars: Kanan, goes deep in Kanan's past, to a time when he still went by the name Caleb Dume. As a young padawan, Kanan is sent to the fight the Clone Wars alongside his master, Depa Billaba. When Order 66 comes down, things go badly, but Caleb somehow manages to survive. But how? And where does a young padawan go from there.

The series' first story arc, "The Last Padawan," will be written by Star Wars Rebels writer and executive producer (as well as one of the minds behind Young Justice and Gargoyles) Greg. We had the opportunity to talk to Weisman about what fans can expect from the latest Star Wars comic book series when the first issue ships in April.

What kind of time span will "The Last Padawan" cover? It starts around the end of The Clone Wars.

I don't know exactly – because I haven't actually scripted it yet [laughs] – but I'd say it's about a year.

You, obviously, do a lot of writing for television. Do you find writing for comics to be a pretty similar process, or do you approach things differently when you don't have a team of actors delivering your dialog?

It's very similar, in a lot of ways. I'm still collaborating with artists. You're right, there are no actors to collaborate with, but particularly with the stuff I've been doing recently since Gargoyles or Young Justice or Star Wars, they're all based on television shows. The actors' voices are all very much in my head. So it's very much like writing a script where you've already got a cast for, and you're writing to the actors' strength, and pretty soon that begins to define who these characters are and how they speak, and how they talk. This has a combination of characters from the show – Kanan, in particular – and original characters in it. But even then, I'll sort of try and mentally cast those roles and sort of hold that dialog in my head.

So in a lot of ways, it's very similar. There's certain advantages to the printed page, in the sense that a viewer can sort of study it a little more, since it's not literally moving past them as they go. But you want your reader to be able to be able to flow through a story, and not be constantly stuck or having to look backwards, or that kind of thing. So in some ways, the goals are the same and the ideas are the same.

A big difference is page count, because a single issue of a comic book equates to about an act of a television show. So if you're doing five issues, like this Kanan story, story-wise it's about as much content as a couple episodes. So that's different, but basically it still amounts to writing the same type of material you're writing for a television show.

Well, you sort of extrapolate backwards. It's not like I've known Freddie for 30 years, but I have the advantage of Freddie being an actor for a long time, and I've seen stuff that he did when he was a lot younger. Plus, you know, I'm making it up [laughs]. It's informed by where I know Kanan's going, ultimately, but its young Caleb, and it's got a different feel to it.

Besides his voice, how is Caleb different from Kanan as we see him in Star Wars Rebels?

The Kanan that we meet - that we saw in that one short, "Machine in the Ghost," that I wrote, and that we saw in Star Wars Rebels: Spark of Rebellion, that Simon [Kinberg] wrote – this is a guy who has put his lightsaber away in a drawer, literally. He's given up on the Jedi way. Not just on being a Jedi, but on what he learned in the Jedi Temple and as a padawan. Whereas the Caleb we meet at the beginning of this series is a padawan fresh from the temple who recently joined his master to fight the Clone Wars. We're meeting a much younger soul, someone who isn't – I don't want to say innocent. He's been fighting in a war, so that's going to color certain perceptions. But he's never faced betrayal, he's never faced complications to his mindset, and that's going to change. So what we're doing here – I'm not even pretending that we're covering all of the emotional ground between where we meet Caleb Dume at the beginning of "The Last Padawan," and where we meet Kanan Jarrus at the beginning of Spark of Rebellion. But we're going to show those first steps, how he went from being a padawan to rejecting the Jedi way.

Prior to Star Wars Rebels, they wiped the slate of the expanded universe. You're getting to write this series at a point on the Star Wars timeline, between Episodes III and IV, that's now relatively unexplored. Does that grant you a certain amount of freedom in writing your story?

Well, the framework exists, because there were these two big giant movies. So the framework is there, and those movies and The Clone Wars series are absolutes. We don't want to contradict them for a hundred reasons, not least of which because, oh my god, what great stuff.

So that framework exists, but yeah, it's great to have the freedom, as part of this team, to explore areas that aren't explored, as long as it makes sense. As long as it fits what we know. And that's terrific. Lucasfilm is trying - as I understand it, the story group is very determined to create something cohesive, but exciting, and Star Wars. Always in the spirit of Star Wars. And that sounds like a given - of course, we're talking about Star Wars - but the spirit of the thing has been present in a lot of EU material, and not in all of it.

So now that they're - not starting from scratch, but maintaining the big tent poles and otherwise giving themselves the freedom of a relatively clean slate, they want to make doubly sure that the true spirit of what George created is in everything that they do.

And I'm just trying to help and not mess it up [laughs].

What kind of story can we expect "The Last Padawan" to be? Classic Star Wars space opera, or something different, more personal maybe?

Well it's very personal. As opposed to talking about a movement, as A New Hope and Rebels does, or about grand, historical events, we are very focused on those events and how they influence one individual. One, young individual. So it's obviously a coming of age story. That doesn't mean there won't be grand adventure, there'll be plenty of that if I'm doing my job right, but it's really focused on this personal story of Caleb/Kanan. And again, if I do my job right, it will be really fun, but also really meaningful.

You're taking up the great Star Wars tradition of the delving into the youth of a known Jedi, as Lucas did with Anakin Skywalker. Any chance we'll see Caleb doing some pod racing?

[Laughes] No. Not a chance.