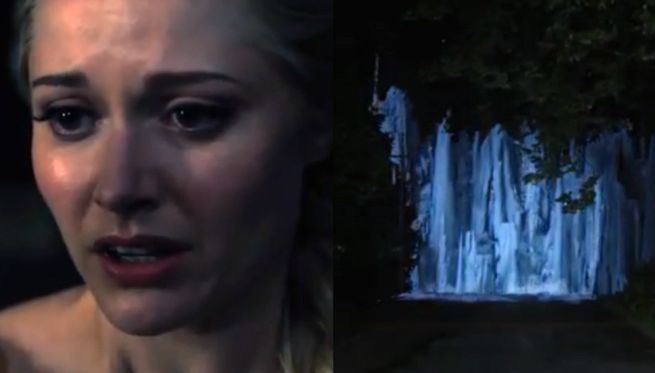 A brand new episode of Once Upon A Time airs tonight, which is entitled “White Out.” We've embedded a new sneak peek at the episode below.

In the “White Out” episode of Once Upon A Time, while desperately trying to find her sister Anna, Elsa is startled by Emma and accidentally traps them both inside an ice cave, with the frozen temperature placing Emma's life in peril. Regina, depressed over her likely breakup with Robin Hood, secludes herself away from the town and Henry, which saddens her son. And with the townspeople considering Mary Margaret their leader, she faces her first leadership task in trying to re-start a generator and restore the town’s electricity after Elsa freezes and damages the power lines. Meanwhile, in the Enchanted Forest of the past, Anna tries to teach a meek David to fight Bo Peep, a brutal warlord who is threatening to take his and his mother's farm away if they don’t pay her price.

”White Out” was written by Jane Espenson and directed by Ron Underwood. The “White Out” episode of Once Upon A Time airs on Sunday, October 5 at 8 PM ET on ABC.

One Upon A Time Season 4 Episode 2: White Out