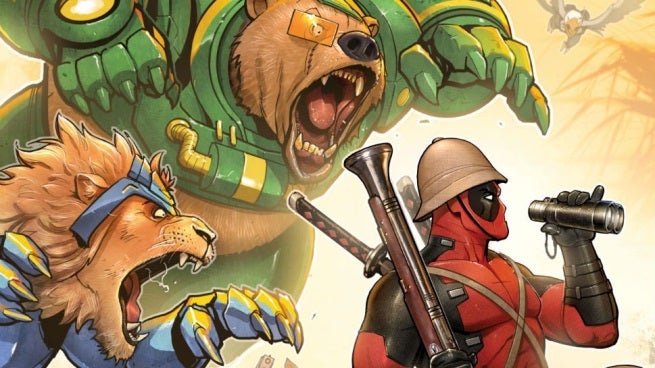 Comedian Paul Scheer will write Deadpool Bi-Annual #1 for Marvel comics. The 40-page issue will be co-written by Nick Giovannetti and will feature art from Salva Espin.

The issue will see Deadpool taking a job for WaterWorld (think the Marvel Universe's version of SeaWorld) dealing with some activists who have been giving the park trouble. Seems like an easy job until Deadpool realizes that the activists are actually Brute Force.

Scheer is likely best known for playing Andre in The League, but Deadpool Bi-Annual won't be Scheer's first foray into comics. He previously wrote Aliens vs. Parker, a comedic take on an alien invasion of earth, at BOOM! Studios.

Scheer says his story will feature "everything you love about Deadpool, plus the bat$#*% insanity Brute Force brings to the table like a bear that drives around in bear shaped vehicle and a kangaroo with Uzis."

Deadpool Bi-Annual #1 goes on sale in September. Here's the official solicitation (via Nerdist):

When Deadpool is hired by WaterWorld to protect their theme park from activists, he has no idea he's going to wind up face to snout with Brute Force—protectors of the environment! Look 'em up! That's right—they're real! Written by star of The League and NTSF:SD:SUV Paul Scheer and Nick Giovannetti, this is one issue sure to make a splash*!

*This joke was not written by them.