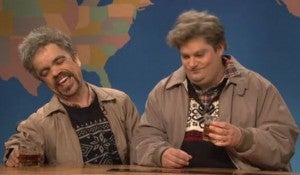 Last night, Melissa McCarthy hosted Saturday Night Live, providing one of the best SNL shows in recent memory. McCarthy is earning rave reviews for her skit playing Sheila Kelly, a basketball coach who showed tough love to her players by doing such things as throwing toasters at them.

However, one of our personal favorite scenes didn’t involve McCarthy, but instead featured a guest appearance by Games of Throne star Peter Dinklage. During the Weekend Update segment of SNL, Drunk Uncle showed up to talk about taxes.

When Weekend Update host Seth Meyers asked Drunk Uncle about watching Game of Thrones, Drunk Uncle introduced his brother-in-law “Peter Drunklage,” who he claimed to watch the show with. Check out the full video below.