Things didn't get fleshed out.

The thing that destroyed the "Youngblood" series after that first issue was a lack of focus. It was just too many characters too quickly pursuing unknown agendas. The attempt to populate an entire universe all at once led by the unbridled enthusiasm of its young creator didn't make for good stories.

The cool costumes and neat weapons and the overall aesthetic can carry you pretty far, but at some point even the most ardent supporter had to look at the earliest issues and wonder what the heck they had just read.

Possibly worse, starting with the second issue, Prophet took over the book. Suddenly, it felt like "Youngblood" (a hotly anticipated new series with a dozen main characters) turned into "Prophet With a Bunch of Costumed People Surrounding Him."

And he's not even a member of Youngblood!

The division of the book between home and away teams immediately vanished with issue #2, in favor of a more traditional single book with interweaving plots.

There was just no time to get to know or care about the characters beyond how cool they looked, and that gets old kinda fast. Deadpool looked cool when he first showed up, but his dialogue and plot-specific actions sold the character for us under Rob Liefeld and Fabian Nicieza. He didn't get lost in pointless fights between total unknowns every month.

It still frustrates me that things didn't land more strongly than they did in these early issues. It's the kind of thing that drives a man to write fan-fiction, if only to add the characterization and the mission of specific characters that are lacking in the actual comic.


The Ideas Behind Youngblood Were Sound

Liefeld had lots of amazing ideas for "Youngblood." You can read all about them in the interview I refer to as "the Youngblood Rosetta Stone," published in "Comics Scene" #25.

It was conducted before Image formed, when Youngblood was scheduled to be a three issue mini-series that Liefeld would sneak into his busy schedule. (Maybe that explains why an issue #0 appeared after the third issue?)

If you read that interview, you'll have insights into what he was thinking, and lots of bits from "Youngblood" #1 will take on new meaning. Things might make a little more sense. They didn't make it to the page, but they were there if you knew about them.

And that's why to this day I'll defend "Youngblood." Maybe the final execution didn't serve the ideas well, but the thought behind the series was genius and deserved better. Liefeld was ahead of his time, and his ideas would only become more commonplace in comics, not less so, particularly as regards superheroes and their interactions with the media.

But as a first creator-owned effort, the lack of editor and some sort of guiding hand really hurt those first three issues of "Youngblood." 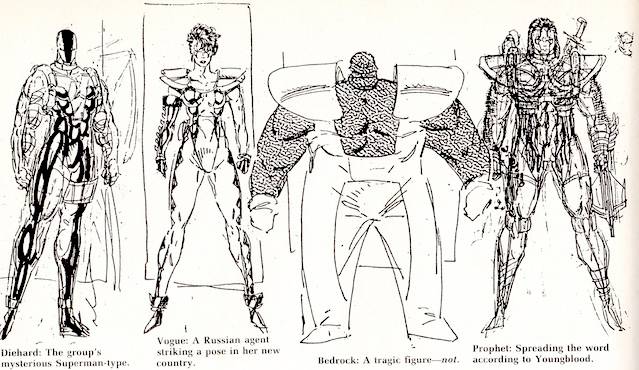 Learning on the Job

The other thing that's clear from looking at the first few issues of "Youngblood" is just how much on-the-job learning was going on. Look at the production values on issue #1 (above) as compared to issue #10 -- or even issue #4, to be honest.

People who complained that "Youngblood" was a slick series without heart couldn't possibly have been talking about the first three issues. Because those look positively amateurish by comparison to how things took off with the fourth issue.

Brian Murray's coloring style is a highlight, but it's drowned out by what I imagine is early Photoshop work attempting to add in backgrounds and fancy effects that just don't work.

I love the work Murray did over Liefeld in "X-Force" #4 and at the start of "Youngblood." His was a singular style, using very different colors for highlights and shadows over the art. I love the yellows used as highlights and the pinks used as brighter skin tones. It reminds me a little bit of what Joe Rosas was doing over Jim Lee in the latter era of his "X-Men" run.

But, then, there were too many gradients and some blur and soft eraser marks to add highlights or push the background back even further. (Was there a "soft erase" or "blur" took that early in Photoshop?)

But look at those issues once you hit the mid-single-digits (above). The paper stock was solid and glossy. Danny Miki started inking Liefeld's art, giving it a new and revitalized look. Even Liefeld talked at the time of feeling like a new artist with Miki handling the inks for him. Miki cleaned lots of things up. As detailed and fine line oriented as Miki can be, he still removed a lot of the more excessive cross-hatching that defined Liefeld's original style.

Eric Stephenson came in as scripter and editor and -- well, the man can't produce miracles, but he certainly made sure the plots were explained where necessary, and the dialogue wasn't just boasts and quips. The stories were also much more focused, including actual character moments.

The colors were handed off to Kiko Takanashi, who produced more volumetric lighting. It felt a little more real, and a little more serious. The overall scheme moved darker, without the extra colors added on highlights or shadows.

Finally, the lettering went from Linda Valentino's hand-lettering to Kurt Hathaway's computerized work. And as much as I love hand lettering and as technical as some of that early computer lettering looked, it was still a vast improvement. (Also, fewer misspelled words!)

"Youngblood" improved with age, but that initial misstep meant that so much of the better later stuff was never seen or considered.


Youngblood: Does It Deserve a Second Chance?

Overall, the series improved in quality by leaps and bounds as it went along. I think a lot of the harsh negative impressions people feel come about because they only saw those early missteps.

It never lived up fully to the promises made in that "Comics Scene" interview. And it's not an instant classic or an evergreen title. But there's a lot of fun, exciting stuff in there, particularly for its time. Liefeld continued to hit on the media's role in covering superheroes and how everything changes in the real world once you add the celebrity aspect in. This series was years ahead of its time. It predates things like, for example, "The Kardashians."

You know what else debuted in the spring of 1992? MTV's "The Real World." To my mind, that's the future that "Youngblood" pre-saged. That behind the scenes story of when a number of people stop being pilot and start being real? That's "Youngblood," the (no pun intended) mutant red headed stepchild of "The X-Men."

I think a serious reboot of the series could work. It has, before. Depending on your definition of "reboot," we've had versions by Joe Casey and Alan Moore that have worked.

The characters are interesting and have strong personalities. It's always been a matter of exploiting them properly. If "Youngblood" had gone the way of "WildC.A.T.s" earlier on, and brought on the likes of Chris Claremont, James Robinsons, Alan Moore, and Joe Casey (those two again) to guide the series along its merry way, it might even be legendary and acknowledged as being ahead of its time.

There's a new "Youngblood" series coming up later this year. I have hopes for it. The question is, how does the concept stay fresh in a world that it once predicted and that it now merely exists in? What can be done to revitalize the series and make its point of view stand out in a world where its main innovation has already been copied to death and beat into a bloody pulp?

Besides being on Snapchat...

We shall soon see, I hope!