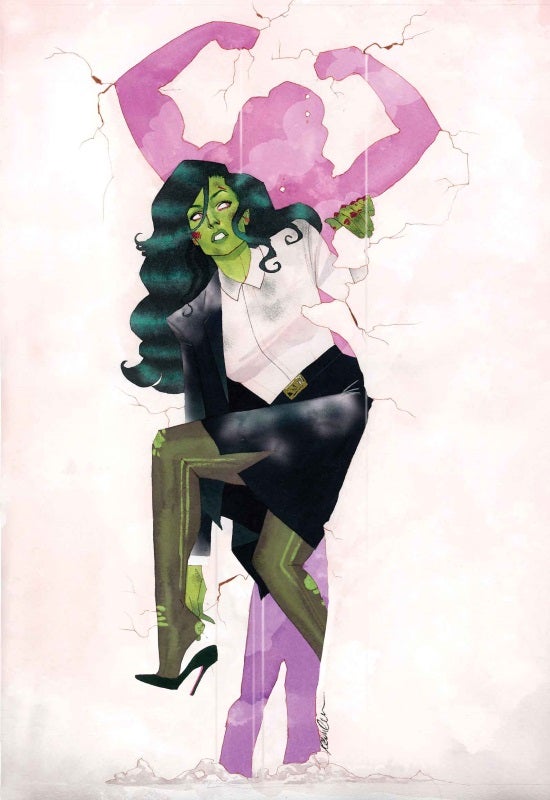 In a new blog post, ScriptNotes host Craig Mazin has clarified remarks he made about the Marvel Comics superhero She-Hulk, which kicked off an Internet furor after both Mazin and Man of Steel writer David S. Goyer made sexually-disparaging remarks about the character. "During our live podcast, I took a swipe at the intentions behind the creation of She-Hulk. Specifically, I felt that she was drawn in such a way to peddle a sexist caricature to teenaged boys," Mazin wrote in part. "I said this because I believe it. Unlike the Hulk, whose appeal was clearly divorced from any kind of normative standard of physical beauty, She-Hulk was initially drawn (and consistently drawn for many years) as slender, long-legged and large-breasted with flowing locks. Her face was the same old media-model-pretty version we see time and time again." He went on to cite some examples of what he says are problematic early depictions of the character before getting back to the meat of his comments: "Bottom line: I wasn't saying that I think she's a slut. I was saying I think the people who created her were at one time pushing a visual image of Hulk as Slut in order to make money. And I don't like that. My comment was entirely about the illustration of a fictional character. It was not a reflection of my opinion of the mind or actions of the character," Mazin explained. "On the other hand, using the word 'slut' was a bad move. It's far too loaded, it's not even accurate to what I meant, and for many it obscured my point. It may be obscuring my point right now, so lesson learned… and I'll not use it again." He also said, after a bit more explanation, that he's pretty much done talking about She-Hulk for the rest of his life. So...at least there that?